A gift of their own for homeless children this Christmas 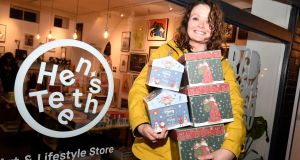 Rachel Cunningham remembers how her idea of a Christmas present drive for homeless children came about. “It was three weeks before Christmas last year,” she says, “and a lady I knew who had been working with families for the last few years told me about one family who couldn’t provide the Christmas they wanted for their children. As a result, their little boy thought it was because he was bold.

“I can’t imagine what was going through his little head that morning,” she says, “trying to figure out what he had done to deserve this. It seemed like just another blow to the most innocent people in our society.”

So Cunningham got together with 70 friends on Facebook, and matched children with donors, who provided the gift requested by the children.

Cunningham is not new to these issues. Having spent several years working for homeless charities full time, she’s aware of the logistics of life lived on the margins. Nevertheless, the story stuck with her, cutting through the statistics and delivering a snapshot of its smaller devastations.

“I was aware of the severity of the crisis. I was working with services involved with homeless families, in particular those who being booked into different hotels on a night-by-night basis. I’ve long put faces and personalities on to the ever-growing numbers becoming homeless in Ireland. It was only when I really saw the impact it was having on children that it started to hit home just how miserable this was for them.”

This Christmas there will be nearly 4,000 children homeless in Ireland, about 40 per cent of the expected 9,700 total. While the economy is booming, and the country boasts upwards of 30,000 empty homes, the number of homeless families has increased 20 per cent in the past year, with Focus Ireland stating Ireland has seen 700 newly homeless families since June alone.

The nature of emergency accommodation itself is also variable. “It really can depend where they are booked in,” says Cunningham, who worked with the families closely last year. “It could be a self-catering guest house or it could be just a basic room with a kettle. Some places really did look after them coming up to Christmas.”

As much as amenities, a large part of the struggle is one of providing stability, particularly within a family dynamic. “The families we worked with moved around a lot – a couple of nights here, then on the move.” For the children this obviously presents its own unique problems. “There’s no stability, no safe place to relax or play and invite friends over, and they end up living in very close quarters with their family, who are all feeling the pressure. Teenagers have no privacy.”

In the absence of political solutions, charitable institutions have been under tremendous strain to meet the provisions of those in need, and by necessity their resources prioritise immediate, practical essentials such as food and shelter. Nonetheless Cunningham found herself wondering if the more human stresses specific to Christmas could be tackled, too. She began by asking families what could be done to help. “We started having conversations with parents about what their child would actually like,” she says, “and we just decided we’d do our very best to ensure we could get it for them.”

For Cunningham the presents themselves are only partly the point. “Christmas is all about the build-up; pals in school talking about their presents and everything else,” she says. “It’s not about being materialistic, it’s about the kids not being further isolated from their peers.”

Once she had decided to do something, it was a process of reaching out to friends and matching each to a specific child’s request. Though it would have been simpler to simply buy a job-lot of gifts and assign them to individual children afterward, the individuality of the gift was, in her mind, utterly key.

“Generic gifts are nice,” she says, “but not every eight-year-old necessarily wants this doll or that. Doing individual, requested gifts takes more work, but it also gives the parents an opportunity to be more involved and means the kids get that personalised wish that they themselves requested.”

Through nothing more than word of mouth, this year’s list of email pledges has already surpassed last year’s total by several orders of magnitude.

“The response last year was amazing,” Cunningham says, before emphasising that it was more than the big ticket presents that made the difference. “Anyone who missed out on giving gifts was able to donate vouchers for food or activities, and these really helped families fill those days between Christmas and school. They can be long, dreary days to fill if you have nowhere to go.”

This year’s deadline for individually selected gifts has passed, but the group is still accepting other tokens, such as stocking filler items, smaller gifts and vouchers.

“Logistically we had to have a cut-off date, but our friends at Hen’s Teeth studio on Fade Street have offered their shop as a drop-off location for small presents until December 18th, and food, cinema or activity vouchers until Christmas Eve.”

Although no cash or cheques can be accepted, Hen’s Teeth will receive the above by post for those who aren’t in Dublin, addressed to: For a Better Christmas, Hen’s Teeth, 13 Fade Street, D02 RR22.