Our wedding story: ‘It was all about us and the children’

You might recognise Fiona Hickey. She's the happy bride appearing in AIB's current ad campaign, all the footage for which was shot on the day of her and Andrew Crowe's wedding on February 3rd, 2015. 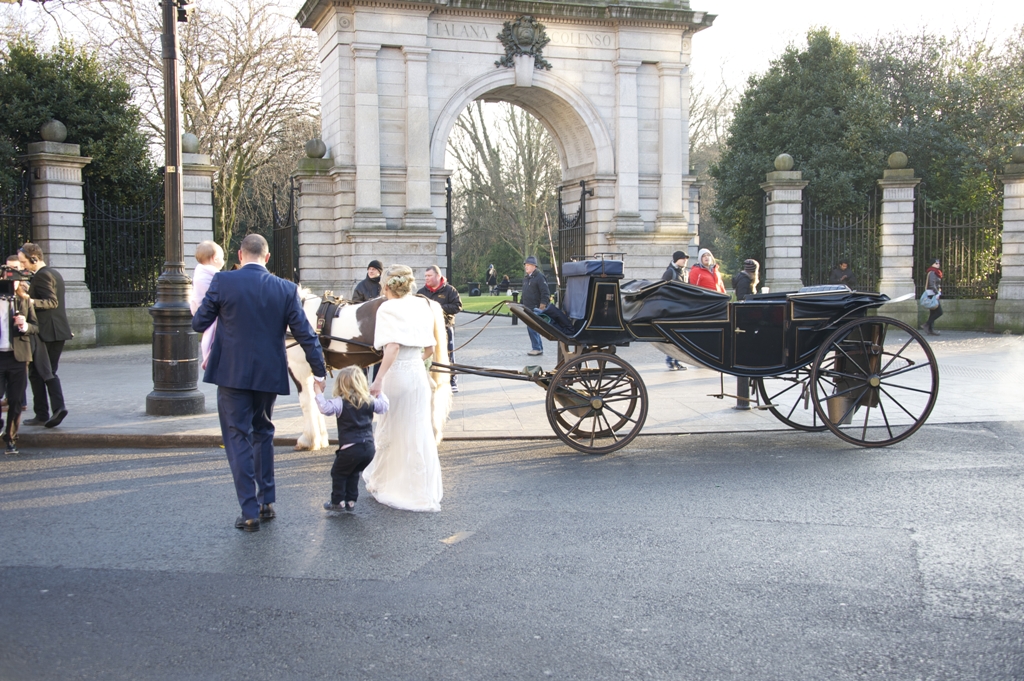 Their son, Danny, was born in December 2011 and a few weeks after daughter Hannah arrived in 2014, on Mother’s Day, Andrew proposed. In front of the two children and the two dogs.

They decided to have no guests at the wedding.

“It was all about us and the children,” said Fiona. She was set on a city centre wedding. “I love the noises, the people and the vibrancy of Grafton Street.”

When she and Andrew visited the National Gallery of Ireland's Georgian ceremony room and met events planner Sinead Leahy, "my heart instantly told me this was our wedding venue".

That morning, the bride had her hair done in Cowboys and Angels and Zoe Clarke did her make-up at the Merrion Hotel before the groom, in a suit from Louis Copeland, arrived with the children.

Fiona put on her Jenny Packham dress and the four took a horse and carriage trip around Stephen's Green (a family Christmas tradition) which dropped them off at the National Gallery just after 3.30pm for the ceremony.

The final song performed by the singer was You've Got the Love by Florence and the Machine which the newlyweds, Danny and Hannah, danced to altogether.

Andrew’s mum Ana is Spanish (and lives in Spain with his dad, Peter) and to honour her traditions, Fiona had made lavender and rice confetti the night before.

Then it was back to Ashbourne to surprise Fiona's parents, Peter and Ursula Hickey, with the big news.

Did they regret missing out? “They were thrilled,” said Fiona. “My mum always wanted her daughters to elope as she’s very no fuss and not into the mother of the bride role. So she was extra delighted. And, I had secretly borrowed a blue rosary beads she keeps at her bedside so I had them with me as a part of her.”

The couple then returned – by themselves – to the Merrion Hotel for dinner at Patrick Guilbald’s followed by a night of champagne.

Campaign for service charges to be shared fairly reaches a tipping point
Christmas markets on your doorstep around Ireland
These ‘cabins’ at the World Cup might not be for everyone, but thousands of fans have booked them
Andrea Corr: ‘We were constantly under pressure to look a certain way’
Cash is king and hide in plain sight: Seven tips to keep your money safe while travelling

Boy who was attacked by dog ‘will never be the same again’, brother says
Meat can thaw on the counter, eggs should be stored in the cupboard, and other food safety myths
Andrea Corr: ‘We were constantly under pressure to look a certain way’
Dublin Port blockade will continue three nights a week, say protesters against asylum-seeker housing plan
‘The Terminal Man’ lived in a Paris airport for 18 years. He was an incredible survivor

Best electric cars to buy in 2023, from small run-arounds to executive saloons

Miriam Lord: Bleating and braying in the chamber - has the live crib been moved to the Dáil?