Our Wedding Story: House sharing that led to a proposal 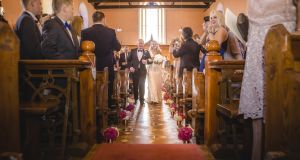 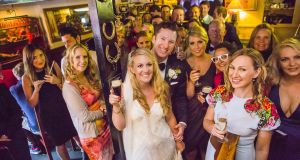 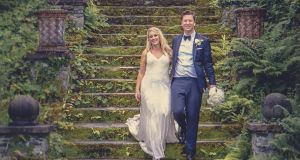 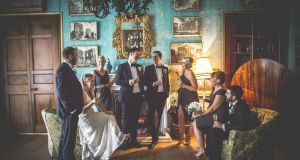 Noel, from Castletownshend, West Cork, left Ireland in 2007 on a world-trip with friends intending to return home after 12 months.

He was offered sponsorship to stay in Australia with his company Pernod Ricard and in 2010, Noel met Megan, a podiatrist from New South Wales in Sydney when a room became available in the house he was sharing.

Megan’s sister Brooke lived a few doors down and her Irish housemate suggested the room for Megan so the siblings could be neighbours.

After a lengthy pursuit by Noel, the pair started dating in 2011.

In September that year, Noel transferred to London to start a role with Absolut vodka and the couple has lived there since.

Noel proposed during a weekend in Venice after calling Megan’s dad Henry in Australia to ask for his blessing. Megan’s mother is Carol Veenstra.

The engaged couple spent a weekend looking at venues across Cork and Kerry and when they arrived at their last stop, “Megan started crying, she was blown away by Bantry House. We had our venue.”

Noel’s father John and his late mother Aileen Burchill married there in 1969.

String music group, Here Come the Trio, played during the mass and Megan walked up the aisle to Eva Cassidy’s Songbird, sung by Noreen Rabette.

The newlyweds left the church to the theme tune from ‘Home and Away’.

Afterwards, their 100 guests stopped off for a drink in Mary Ann’s Bar & Restaurant in Castletownshend before driving on to the reception Bantry House.

After dinner, provided by Eunice Power Catering, The Bentley Boys played downstairs in the blue room and for the couple’s first dance to ‘Sky full of stars’ by Coldplay, three confetti canons were fired.

“Despite a weak Seige of Ennis the Riverdance turned out pretty well,” remembered the groom with a laugh.

His sister Angela made the wedding cake and cupcakes while her friend Adele Kershaw (Flowers by Adele) created the floral arrangements.

Megan and her Australian girlfriends collected wild hydrangeas for the table centre-pieces and another friend Lauren created a photo-booth area and later edited 1500 photos into a 5 minute video for the couple.

The newlyweds spent the week after the wedding in West Cork and Kerry and flew back to London to catch a flight to Menorca where they a spent a week on mini-moon.

Railway cottage with amphitheatre garden in Ballsbridge for €745k
4