On Your Bike: Rise of the cyclist

Far more Irish people are riding bikes to work now, and on safer roads, than a decade ago. Shame more of them aren’t better cyclists. As Bike Week begins, we start a series on Ireland’s cycling culture 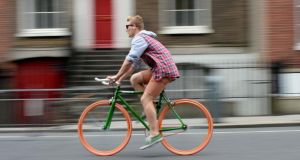 On the road: commuters may turn to cycling to economise, escape traffic jams or get in shape. Photograph: Alan Betson/The Irish Times

Teams of Lycra-clad cyclists haul themselves up the country’s mountains at weekends. Families take to parks, seaside promenades, canals and riversides. During weekday rush hours commuting cyclists are at the top of every queue of cars in the towns and cities of Ireland. It would be hard not to have noticed the rise of the cyclist in recent years, particularly if you live in Dublin.

In the past decade the number of people cycling into the capital each morning has increased by 68.5 per cent, according to Dublin City Council. In the past five years alone the figures are up by 40 per cent, and bicycles now account for almost 9 per cent of vehicles coming into the city centre during the morning peak.

Census figures published last December show that from 2006 to 2011 the number of Irish people cycling to work, college or school increased from 53,960 to 61,177, the first increase, according to census data, since the mid 1980s.

Why the rise? It’s partly thanks to a safer cycling environment. In 2006 nine cyclists died on the roads; last year eight cyclists died; so far this year there have been four deaths.

The Green Party’s most impressive achievement during its difficult time in government was arguably the Bike to Work scheme. More than 200,000 bikes have been bought under the tax-incentive programme since it was launched, in 2009. Some may have spent the best part of the past four years in the shed, but many are being used for the purpose intended, and many by people who are new to the bike as a form of commuting.

We can also thank Dublin City Council and its commercial partner JCDecaux for Dublinbikes. Critics said the rental scheme’s bicycles would all end up in the Liffey, but they didn’t. Dublinbikes is the most successful such scheme in Europe in terms of the proportion of residents who use the bikes: there have been more than five million rentals since its launch, in September 2009.

Even those who were uncomfortable with the council’s deal with the advertising company – JCDecaux was permitted to erect advertising in exchange for the bikes – must admit Dublin’s citizens got a good deal.

A €35 million expansion of the scheme, due to begin in October, will increase the existing 550 bikes at 44 hire points to 1,500 bikes at more than 100 locations. Some of this will be funded through an increase in the annual fee, from €10 to €20, but the council will also need to find an extra €500,000. It hopes to do this through sponsorship: JCDecaux will not do another ads-for-bikes deal.


Banishment of HGVs
Dublin’s banishment of lorries from city streets during the day has been another gift. Of the cyclists killed on Dublin roads from 2002 to 2006, almost three-quarters were hit by left-turning lorries. In February 2007 the council banned heavy goods vehicles in the city centre between 7am and 7pm. More than a third of the country’s cyclists live in Dublin, but of the nine cyclists killed in 2011, just one was killed in the capital.

Outside Dublin, the Department of Transport, the National Roads Authority and the National Transport Authority have made some efforts to improve cycling infrastructure. Minister for Transport Leo Varadkar has asked the NRA to plan a Dublin-Galway cycle route. The NTA is due to finalise its designs for the Dublin-Maynooth section of the proposed route, along the Grand Canal, this year. The NRA intends to deliver the Maynooth-Galway section of the route, which it is looking after, in sections. The path from the Meath-Westmeath boundary to Mullingar is already under construction.


Driven by poverty?
The last peak in cycling numbers was in the mid 1980s. Can we conclude that poverty is driving us back to the bike? Not entirely. Given that the measured increase has been in the number of people cycling to work, we know that many cycling newcomers at least have jobs, though they may well have experienced pay cuts and other difficulties.

Workers living in rented housing are more than twice as likely as homeowners are to cycle to work. It’s true that renters are generally worse off than homeowners, but they also tend to be younger and to live in city centres.

Workers taking to their bikes may be economising, but it is more likely to be a combination of a break for freedom from commuter traffic, and the Bike to Work and Dublinbikes schemes; it may also be the result of being hit over the head with statistics about obesity.

Yet, despite all these improvements, the number of people cycling is nowhere near what it was in the lean 1980s. In 1986, 146,962 people used bikes to get around each day. This figure declined steadily until 2006, when there were fewer than 54,000 daily cyclists. Although numbers are recovering, they’re still not much above 61,000.

There are other trends, few of them encouraging. Women cycle far less than men, for example, and now make up a smaller part of the cycling population than they did 30 years ago. In the mid 1980s more than a third of cyclists were female. Now just a quarter are.

The number of third-level students cycling isn’t inspiring either. Just 8,530 students, or 5 per cent, cycled to college.

With so few people of this age using bicylces, the next generation is poorly placed to fuel further rises in two-wheeled transport.