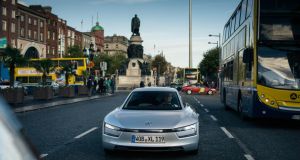 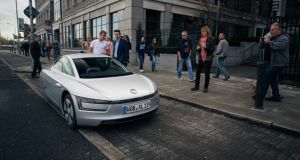 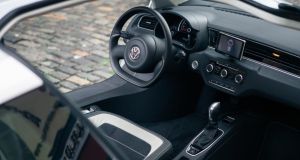 Inside the XL1 is reather basic - and all about weigh saving. Photos: Paddy McGrath 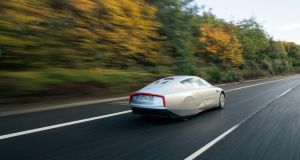 Out on the M1 today the VW XL1 proved its not just designed for low-speed city driving. Photos: Paddy McGrath 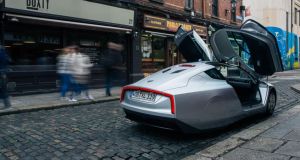 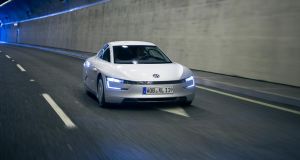 It’s the world’s most fuel efficient production car and it’s on the streets of Dublin this week.

The Volkswagen XL1 achieves nearly 300mpg in old money or under 1 litre/100km. It looks like a futuristic sports car, sets new standards in aerodynamics. And it stops traffic, literally.

Perhaps it’s a sign of the times but the eco-friendly XL1 draws the sort of audience and public interest normally reserved for high performance - and incredibly thirsty - supercars. The big difference however is that there is none of the envy, spite or bitterness that can often be evoked by flash supercars. The XL1 brings out the best in people, their interest in the design and the engineering feat that brought this car to reality. Its quirky looks - in particular those gullwing doors - brings a smile to faces, while the fuel economy stats provoke looks of disbelief and the odd expletive. It attracts more thumbs-up than a bus full of All-Ireland winners returning to their county with Sam Maguire on the dashboard.

At times like these it’s always handy to have a typecast German engineer on hand quoting the stats: 300mpg always sounds more believable when stated in a matter-of-fact Teutonic accent. Thankfully during my brief drive in the XL1 around Dublin this morning I had just such an affable VW engineer to hand, Patrick Mank, who enthusiastically answered the same questions about fuel, price and performance about 50 times while we were together.

So let’s set the scene with a few of those all-important figures.

It’s powered by a two-cylinder 800cc diesel engine in the back and a litium-ion battery pack up front, both driving the rear wheels with a total output of 77bhp. The battery pack can power the car on full electric for up to 50km and up to speeds of 120km/h before the little diesel engine kicks in to lend a hand. It’s a plug-in hybrid diesel so that means you can recharge the battery pack from the mains electric in roughly 2 hours 30 minutes on the Irish electric system, but it also charges from braking and the like as with a regular hybrid production car.

It weighs in at just 795kgs, just over half the weight of the average family car. And let’s just remember that fuel economy figure again: 300mpg compared to 75mpg or so for the most frugal diesel engines on the market at present.

So what’s it like to drive? Well getting in and out of cars with gullwing doors is always a little bit of a yoga feat and the XL1 is surprisingly low to the ground. Inside and your basically lying on the floor, a small steering wheel in hand and a speedometer display that’s largely taken from the current VW Up! city car. The rest is pretty basic fare, though the rearview camera screens fitted to the door take a little time to get used to. It’s all about saving weight and fuel so despite all the modern tech, the windows have manual winders. The battery pack is housed in front of the passenger, so that seat is pushed slightly further back than the driver.

As with most hybrids, starting it is merely the push of a button followed by the flash of a few lights. There’s no accompanying sound. The first thing you notice is the heavy steering. Power steering went into the engineering bin as part of the effort to lose weight and reduce energy usage.

As a result it’s a bit of a workout at low speeds, but then older motorists will remember a time when this was the norm, before we were all mollycoddled with technology.

The throttle response is smooth, but you don’t exactly hurtle towards the horizon and on an 80 per cent battery charge we were staying all-electric around town. You can call up the little diesel engine for help if you floor the accelerator but even then the power feed is gradual and smooth. This is no supercar in the traditional speed sense.

Out on the M1 motorway and the XL1 was drawing stares - and a lot of legally questionable smartphone photography - but the most noticeable feature behind the wheel is how it can stick to a speed of 80km/h or 120km/h as if on cruise control.

It’s actually a really easy car to drive, more like an eco-friendly supermini than a €110,000 record-breaker.

Various engineering feats are at work to achieve the magical 1 litre per 100km figure - the engineering equivalent of running the four-minute mile.

The XL1 has been a test-bed for the latest fuel-saving and aerodynamic endeavours at Volkswagen, and in many ways it has been the playground of the firm’s brightest engineers. Hundreds of new techniques have been explored in its development, from a new way to polish the cylinder linings through to the use of cameras and screens instead of rearview mirrors.

Arguably the most significant fuel saving comes from the XL1’s aerodynamics with a drag coefficient of just 0.189. In layman’s terms it’s as slippy as a bar of soap and reducing the wind drag is enormously important in cutting down fuel consumption. Part of this is down to wheel arch covers on the rear, while the removal of the wing mirrors also greatly cut down on drag.

As it’s still a limited production car - a prototype in many ways - it has been licensed to test the new rearview camera technology. Door mounted cameras feed video to two screens fitted on either door. It takes a few minutes to get used to the perspective of the cameras but overall it’s a much better system than physical mirrors as it can overcome problems like blind spots and lense technology can make night vision a viable proposition. Getting these cameras onto large volume production cars requires new standards be set and international agreements but it’s hoped we will see similar cameras on cars within two or three years.

As for the other fuel-saving feats and electric technology, much of the developments made in this car can be seen in the new hybrid and electric Golf and Up models, while the new Passat range will come with both a hybrid or a full electric powertrain, much of the R&D for which can be traced back to this little two-seater.

The XL1 is a production car in the widest sense - only 250 units have been built with a price tag of €110,000 in Germany. It’s already sold out. So who has bought the 250 built? Well they have largely gone to the well-heeled car collectors in Germany and Britain, or to wealthy design enthusiasts who regard the XL1 as the pinnacle of automotive engineering at present. Needless to say that while the XL1 is a doddle to drive and one of the cheapest cars on the road to run, don’t expect to see too many parked up outside your local Spar anytime soon.

* For those who want the chance to drive the VW XL1, they will be available for public test drives tomorrow between 10am and 4pm at Frank Keane VW on the Long Mile Road, Dublin 12.

Covid deniers: for the sake of the vulnerable, do what’s asked of you
8