This is . . . civilised. And that is true of the whole car 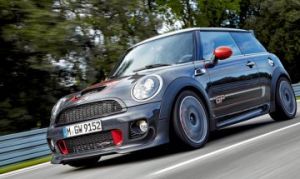 FIRST DRIVE: The back seats are missing. That’s the first thing you’ll notice when you climb aboard the (deep breath) Mini Cooper S John Cooper Works GP. It’s a limited edition Mini, with just 2,000 production examples for worldwide sale, and it has been body-kitted, tweaked and tuned to within an inch of its tiny life.

But the first thing you’ll notice is that the back seats have been binned. That’s both weight-saving (the GP weighs in at an impressively dainty 1,100kg) and intended to improve the handling, thanks to the massive red strut brace stretched across the space where the seats aren’t. It makes the body stiffer, which in turn makes the suspension work more precisely, which in turn . . . you get the idea.

Under the bonnet, which is under some fairly silly GP stickers and some fairly lovely (an unique to the model) Thunder Grey metallic paint, you’ll find the familiar 1.6l turbo petrol engine that has been powering the Mini Cooper S since 2006.

For the GP it has had some tweaks over and above the regular Cooper S and the previously range-topping Cooper S John Cooper Works model, with its 210bhp output. It gets an aluminium cylinder block and engine mounts, reinforced pistons and cylinder head, a low-weight crankshaft and even valves filled with sodium to improve their cooling efficiency. And all of that jiggery-pokery gives you . . . 218bhp. Hmmm. So not a massive improvement in power, then.

But it must be a torque-monster, with that up-rated twin-scroll turbo, right? Well, no: 260Nm of torque (280Nm on short-lived overboost) is about what you get from a 1.6l diesel Cooper D.

This Mini is all adding up a bit oddly, isn’t it? The body kit, and those gorgeous 17” alloys, seem to be writing profligate cheques the engine can’t cash. And then you clock the time this car set around the Nurburgring race circuit in Germany. Normally, I regard Nurburgring times as pointless genitalia-waving but the Mini GP’s time of 8.23 is seriously impressive, and with that relatively underpowered engine it means the chassis must be doing something right.

More impressive is the way it works on the road, and here again the Mini GP confounds expectations. Without rear seats, and with the strut brace, body kit and liquorice-strip tyres, you might be expecting a stripped-out, race-spec cabin. But no. There is climate control, an iPod connection, Bluetooth phone and a trip computer. Here too are lovely, leather-wrapped bucket seats that grip without squeeze and cosset without ache. This is . . . civilised. And that is true of the whole car.

Yes, it rides firmly and around town it bucks and skips over bumps in a highly irritating manner. But get it out onto the open road and suddenly the ride settles down, and aside from an occasional tendency of those specially designed 215/40 front tyres to tramline it’s just so poised and well set up that it can take your breath away.

The traction and stability control system can be set up to stop the car sliding out of control, but without interrupting engine power. The body kit may look silly but it cuts rear-end aerodynamic lift by a claimed 90 per cent, so it keeps the GP planted to the road.

The steering is just about perfectly weighted, and feed back a constant chatter of road surface data to your fingers. That long-held Mini trait of seemingly endless front-end grip is magnified here, so that the nose flicks into tight, fast corners with a tenacity that borders on the terrier-like. But it never feels nervous. Even on a proper, bumpy, wet, puddle-and-mud strewn Irish back road, the Mini GP feels secure, sure footed and above all, fun.

While it might be set up for the racetrack (and the suspension is fully adjustable for that if you have the time, tools and inclination) it is a supremely talented road car, able to devour favourite stretches in madcap dashes of fizzing revs and limpet grip. And it can then settle down and be a surprisingly comfy, quiet and capable motorway cruiser, or at least a far better one than the GT3 styling would have you believe.

Downsides? Well, the lack of rear seats means it’s either a two-seater with a massive boot or a seriously impractical van. The brakes, which are so brilliant and reassuring on fast runs, are irritatingly snatchy and sudden around town. And it costs €47,640. For a Mini. With no back seats.

For all that, I’d be amazed if the GP did not sell out fast. For a select few, those with the right roads on their doorstep and a love for the Mini brand, it is a brilliant little thing, all pumped-up aggression with a bass line of usability.

Yes, it’s silly and overpriced but then so are most Hollywood film stars, and the world would be a poorer place without them too. It’s not quite the best hot hatch around (Renault Megane RS, step forward) but it is just terrific fun, missing seats and all.