The perils (or otherwise) of pre-registering new cars

Car makers deny it, but as many as one-third of new cars sold in 2014 may have been pre-registered to boost end-of-month sales totals. But is pre-reging bad for business? 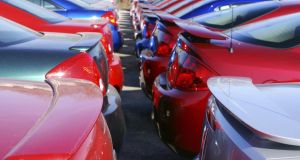 While we celebrate the end of a much-improved year for new car sales, and anticipate the boom in new car sales in 2015, it’s quite likely that as many as one-third of all those cars sold in 2014 and likely to be sold in 2015 are not actually being sold to customers but to dealers and the carmakers themselves.

That’s the sad truth: even in a recovering market, so-called pre-reging is still going on and a large number of cars are being registered on the last sales day of key months so as to keep the figures artificially high and earn dealers and importers their all-important sales bonuses.

So how do we arrive at the figure of one-third? Well, as it’s almost impossible to be precise about the actual levels of pre-reging, with a bit of transposition, that’s how. Irish car registration data tends to be pretty opaque, but in Germany we can say precisely how many new car sales are registered to manufacturers, garages or repair shops, and the figure there is 23 per cent, with a further 10 per cent going to hire-drive companies (effectively a long-finger form of pre-reging), while in the UK it’s reckoned that as many as 500,000 out of the 2.2 million cars sold there in 2013 were pre-registered.

Looking at the daily registration figures for eight key car brands across the all-important first three months of the year, it’s clear to see that sales spike sharply upwards in and around the last days of each month – the very days when dealers need to meet their sales targets so as to receive lucrative bonuses.

Rampant pre-registerer Audi is often accused of being a rampant pre-registerer, and the figures do indeed suggest that there may be some truth in that. On the first sales day of January, a day when it would be safe to assume a high level of demand, Audi sold 67 cars. On January 30th, it sold 85. On the 31st, the last day of the month, that figure jumped dramatically to 136. It dropped massively then to 36 on the first sales day of February, followed by another spike at the end of the month, and so on into March.

But Audi is far, far from alone. The same or similar pattern is repeated at Ford, Hyundai, Nissan and Volkswagen. Of the brands we looked at, BMW, Mercedes-Benz and Toyota were the ones which seemed to be avoiding the process, with much lower end-of-month sales spikes in general – although there were some significant last-minute registration rushes even for those brands. Toyota, for instance, registered 298 cars on the last day of March, that crucial last day of the financial quarter, against an average daily March sales figure of 37.

Audi and Volkswagen both declined to comment on the figures, but others were more forthcoming. The general tone of the trade’s response to our questions, however, was one of denial. Most companies stated, unequivocally, that they do not engage in pre-reging to artificially boost sales figures.

A spokesperson for Toyota Ireland told The Irish Times: “Toyota does not engage in pre-reging as a means of artificially boosting its monthly sales and has consistently highlighted over a number of years the long-term damage of pre-reging, not just to the brands who engage in it, but to the customers who buy those brands, as pre-reging has a detrimental effect on the secondhand value of those marques.”

Similarly, a statement from BMW Ireland said: “BMW does not encourage or reward ‘pre-registrations’ because their eventual sale is usually at a much lower profit level. Our business model is based on giving priority to supplying a bespoke BMW to a customer’s exact specification whenever possible.”

Incoming Ford Ireland boss Ciaran McMahon said: “Ford does not engage in the practice of what is known as ‘pre-reging’, a practice that has become more prevalent in the industry over the last number of years. The sales analysis trend for Ford for the first three months of the year is not unusual given the widely used sales incentive programmes whereby dealers are given monthly and quarterly targets to reach.”

Stephen Gleeson, MD of Hyundai Ireland, told The Irish Times: “We are proud to be a brand which relies on genuine retail sales and not last-day pre-registrations, as the figures demonstrate when compared to our peers. The irony is for the guys who do it, they just kill the start of the next month as the dealers have to find homes for the cars before they can sell new ones.”

James McCarthy, MD of Nissan Ireland, said: “All of our lives are measured in months and all of our business processes are structured to hitting those monthly targets. Often, sales will spike up at the end of the month because our sales department is putting pressure on dealers to hit their monthly targets. But does Nissan pre-reg? Hand on heart, I can say no. It’s a very expensive process and, as an independent importer, we have to mind our margin on every car.”

While everyone is busy denying that they pre-reg, or offering some explanation as to the nature of those month-end spikes, it seems that the practice is certainly out there, and may be much more widespread than people care to admit. After all, if Germany and the UK are experiencing high levels of pre-reging, then surely Ireland, with its identical mix of car makers and importers, must be seeing proportionately similar levels.

The problem is that we, the consumers, do not know for certain what’s happening. Obviously, pre-registrations mean there’s an opportunity for you to swoop in and grab a bargain new motor. Discounts as hefty as €7,000 off a new price have been heard of, so you really can make a significant saving, which is all well and good.

The flipside should be obvious, though. If there are more new cars being registered than the public actually wants to buy, then there are clear pressures on the supply/ demand equation and equally obvious effects on second-hand values. Not only are these cars being added to a market that doesn’t, strictly speaking, want them, but they’re coming on to the market at a hefty discount, further driving down used car values.

According to the UK’s CAP vehicle valuers, “there is now a growing risk of oversupply among younger cars as many manufacturers continue to pursue dealer self-registrations or ‘short cycle’ rental business as ways to gain market share.The fear is oversupply among nearly-new cars may ‘ripple down’ through the other age bands as older cars devalue to remain competitive on the forecourt.”

Now there is an interesting corollary to all this and that is that used car values in Ireland have risen significantly in the past few years. Indeed, earlier this year when we evaluated the rise in used car values (including such vehicles as the Audi A4, BMW 3 Series, Ford Mondeo and Nissan Micra) we found that values had actually risen by an average of 18 per cent – a significant amount.

So we can relax then, and assume that there is no downside to pre-reging? Unfortunately not. The upwards pressure on used prices has been caused by the dearth of new car registrations (even taking pre-reging into account) since 2009. The used car market dwarfs the new car market in sheer numbers, but without a steady supply of new cars, there was under-supply in the popular two- to three-year-old old segment. That has kept used prices relatively buoyant.

That rising tide is beginning to ebb now, though, and early signs are that 2014’s relatively healthy sales, and the prospect of significantly better again in 2015, is already starting to soften those used values.

The ghost of pre-reging hangs balefully in the air, however. Perhaps it is time to finally draw a line under the practice by bringing it in from the cold. Why not simply have the monthly registration figures published, as they are in Germany, with the ownership of the vehicles revealed – private, corporate, car maker or car dealer? Think of it this way – we expect to see published figures for fuel consumption and emissions, so that we can budget for running costs, yet depreciation is the biggest running cost of all, and pre-reging can have a deleterious effect on retained value. Time for the car makers to ’fess up to self-selling.

Driven by sales targets: Number of vehicles the major carmakers sold in Ireland over the first three months of 2014