The new Mini Cooper D – could it be magic?

The Mini Cooper D hatch is smooth, slick and pricey, but its diesel engine is nothing short of remarkable, and it’s still lots of fun to drive

The Mini Cooper D hatch is smooth, slick and pricey, but its diesel engine is nothing short of remarkable, and it’s still lots of fun to drive. Video: Neil Briscoe 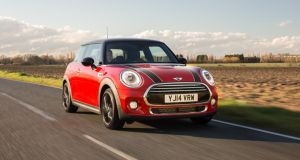 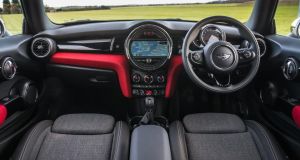 Cabin quality on the up but why move the big speedo and still leave the space for it?

The magic happened somewhere on the twisting mountain road running back towards downtown Palma. Mallorca, for all its sprawling size, is still essentially a tiny island and it gets crowded. Buses, taxis, hire cars and especially cyclists (thighs bulging, lungs huffing on the steep mountain ascents) all compete for narrow, sinuous road space. Finally, though, it all cleared out, the Mini cleared its throat and we were off and, yes, the magic was happening.

It’s staggeringly easy to become both blase and cynical about the Mini. BMW has managed to flog 2.4 million of them since it recreated both car and brand back in 2000. They are everywhere, in all stages of life, condition and tune. You probably know someone who has one. You will therefore know, too, that they are expensive, cramped and almost improbably retro in their styling. And elephantine compared to the trim, stripped-down 1959 original.

All true, in its way, but much of which kind of misses the point. Expensive? Not if you think of it as what it really is – a compact BMW coupe. Cramped? Doubtless, but this new model helps a little with a 28mm increase in wheelbase thanks to its new chassis. Improbably retro? Yes, fair cop, and you’ll either love it for that or hate it.

But magic? On the right road, yes, absolutely. There are few other hatchbacks as purely entertaining as a well-set-up Mini, even one powered by diesel; when it plugs both itself and you into the road surface, then it is quite brilliant.

This new one takes a little more effort to get into that magical groove, though, possibly because BMW has actually been too successful in planing away many of the old car’s rough surfaces. It’s much quieter than before (albeit tyre roar is still an issue), it rides more smoothly (albeit no Mini owner will be a stranger to their bump-stops on a rough road) and it has smoother steering. Smoother? Yes, the old Mini steering bucked and writhed in your hands. It wasn’t especially cultured but it made you feel as if you and the car were working together. Now, with a more linear feel to the rack, it’s technically better but possibly a bit less fun as a result.


A gile steering
Still, on these corners, on this road, once you get accustomed to the steering’s feel, it is quite brilliant. It doesn’t quite match the old Mini’s ability to turn in tightly from a late-braking, running-wide cornering style, but it’s still remarkably agile. (Elephantine? Hardly. It’s bigger by far than an original Mini but still six inches shorter than a Ford Fiesta or Audi A1.)

The new diesel engine is little short of remarkable, too. It drops to 1.5 litres from the outgoing 1.6 and drops a cylinder too, from four to three. It is very, very refined, though, almost never giving away its physical nature with a three-pot throb.

It’s punchy, too, with surprisingly crisp throttle response and a wonderfully elastic nature – as long as you keep it above 2,000 rpm; with the crisp and slick new six-speed gearbox, that’s no hardship.

It should prove remarkably economical, too. Mini claims 80.7mpg, and, being as the old 1.6 could do 60mpg (clattering and gurgling noisily as it did so) this one should crack 65mpg, maybe even 70mpg, in everyday driving. The crucial CO2 emissions figure of 92g/km will keep your motor tax bill down to a very acceptable €180 a year.

The interior could prove something of a talking point, though, and indeed did on our test drive. There is much that is good here. Quality levels have taken a big step forward, and everything you touch looks and feels either soft and squidgy or shiny and silky. The seats are very comfy, if a little tight across the shoulder-blades for the huskier gentleman, and the driving position is more or less spot on.

You can have all manner of high-end, high-price options such as a heads-up display (which you can’t see if you habitually wear polarised sunglasses) or a €2,300 navigation and communications system which allows you to pre-plan journeys from your smartphone, tells you what the traffic is going to be like and even reminds you to pick up some milk (no, really).


New, small speedo
I find the decision to move the big, dinner plate-sized speedo out of the centre of the dash a little odd, though. There’s a new, small speedo up behind the steering wheel with both analogue and digital displays, but the analogue one is so vague that you just end up using the digital display anyway, as one tends to do with the old Mini. The big round space in the centre of the dash is still there, taken up now with the infotainment screen and a ring of LEDs that act as an ersatz rev counter or jiggles with different colours if you adjust the heating, select a different driving mode (Sport, Mid or Green) and so on. It’s all a bit incongruous, though, and I for one miss the old, big speedo.

Still, as I said, on the right road – magic. Fun. Full of character. Better in terms of quality and refinement than before. You do have to dig a little deeper to find the old Mini spirit, but it’s worth breaking out the shovel for.

Our verdict: 3/5
Still not practical and still an acquired taste, but new engine is terrific and it’s still a blast to drive.