Testing of unconscious drivers to start next month 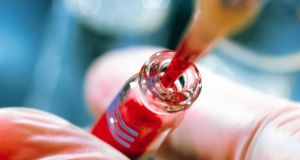 The testing of unconscious drivers involved in crashes for the presence of alcohol and drugs and the introduction of roadside impairment tests are due to start next month.

Testing of unconscious drivers will allow blood samples to be taken as close as possible to the time of a collision because levels of intoxicants can fall significantly by the time an incapacitated driver regains consciousness.

The new law will give gardaí authority to direct a doctor attending the injured person to take a blood sample.

This sample will be stored but not analysed until the person was in a position to give consent for it to be analysed. A refusal to provide consent will be an offence, in the same way as refusing to provide a breath sample during a mandatory alcohol test checkpoint.

The Irish Medical Organisation has welcomed the proposal as a deterrent to drink driving while road safety groups such as Parc said it would reduce incidences of a driver feigning injury in a bid to avoid being tested.

It is mandatory for all drivers involved in a serious injury collision to be tested for alcohol and drugs.

The change was originally proposed three years ago by then minister for transport Leo Varadkar but was delayed after Attorney General Máire Whelan advised the Government that primary legislation would be required for the process to withstand court challenge.

A similar power is available to police in other countries. Under the Police Reform Act (2002), British police are permitted to request the taking of a sample from an unconscious driver.

The measure is part of the Road Traffic Act 2014 which came into force in February but the sections relating to testing unconscious drivers and roadside impairment tests were activated pending the completion of consultations with gardaí and the medical professional.

Roadside impairment tests require a motorist to step out of their vehicles and perform a series of tasks based on co-ordination such as balancing on one leg, touching their nose or walking a straight line.

This measure is being brought in to assist gardaí in detecting drug driving. It is likely that impairment tests will be carried out in conjunction with breath tests for alcohol at roadside checkpoints.

The Medical Bureau is also tendering for a roadside device that can check a driver’s saliva for the presence of drugs.

Cannabis and benzodiazepines are among the most prevalent drugs identified in drivers, but others detected in postmortems include cocaine, amphetamines and other prescription drugs.

Thousands of gardaí have been trained in standard impairment testing.