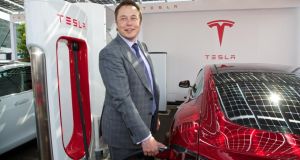 Rival car firms could have a chance to catch up with Tesla, the world’s most advanced manufacturer of electric cars, after boss Elon Musk said he wants to open up Tesla’s technology and patents for use by others.

Billionaire Musk announced at a recent shareholders’ meeting that he is “playing with doing something fairly significant on this front which would be kind of controversial with respect to Tesla’s patents”.

Tesla’s Model S saloon, whose right-hand-drive version has just been launched, is generally considered to be the apogee of current electric-car technology, with BMW-bashing performance and 400km single-charge range.

Musk later told BBC News, “We’re trying to figure out how to accelerate the advent of electric cars, and to the degree that we create technological barriers for them, it’s not going to happen. We don’t want to cut a path through the jungle and then lay a bunch of landmines behind us.”

The motor industry has been here before. A Volvo engineer, Nils Bohlin, effectively invented the three-point seat belt, a device that went on to save millions of lives.

Volvo and Bohlin recognised the ground-breaking nature of the invention, but rather than sit on a patent they opened the technology to the wider world, increasing safety for all.

More recently, Fiat and Bosch developed common-rail diesel injection technology, a development they shared freely with all other carmakers.

Tesla’s Model S, which costs just over €62,000 in the UK, will be joined by the Model X SUV before the end of next year. Musk has also promised a BMW 3-Series rival costing about half as much as a Model S.