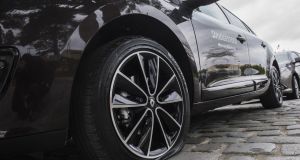 In a chilly venue in the hills outside Nice, Japanese tyre giant Bridgestone launched a new type of run-flat tyre – “DriveGuard”. The big news is that DriveGuard, unlike traditional run-flats, can be fitted to any car that has a tyre pressure monitoring system (TPMS). What’s more, these tyres are repairable.

Conventional run-flat tyres feature thicker load bearing sidewalls that can support the weight of a car when it gets a puncture. When the TPMS indicates a loss of pressure from a puncture, run-flats allow your journey to continue and this is also the case with DriveGuard.

The official guideline for run-flat (and DriveGuard) use says it is okay to continue driving at speeds of up to 80km/h for 80km. As soon as practicable a punctured run-flat tyre must be replaced with a brand new one. The reason being that there is no way the repairer, who is legally responsible for putting the tyre back on the road, can certify that the tyre wall’s integrity is intact and not compromised.

DriveGuard tyres can be treated and inspected in the same way by the repairer as they would a normal conventional tyre. If there is no visible debris or damage to the side wall a standard repair can be done (there is no Irish official standard so repairers here use the British one). If there is any damage to the side wall on a DriveGuard or normal tyre the tyre must be replaced.

While traditional run-flats represent a great safety innovation they have failed to go mainstream. The reason, apart from a significant price premium and the fact you cannot repair them, is that up until now run-flat tyres needed to be developed with a specific model of car in mind and they also require a special wheel rim that can securely locate the tyre in place. Bridgestone Ireland says only a tiny percentage of its car tyre sales are run-flats.

The current crop of run-flats deliver a more sophisticated ride than the original, but are still harder riding than when shod with conventional rubber. The first generation run-flats were very stiff and criticised for their less than sophisticated ride. Today in Ireland, Bridgestone supply run-flats to some BMWs and Minis, while some other tyre brands supply their version of run-flat or extended mobility tyres to the likes of Mercedes-Benz. Bridgestone is continuing with the traditional run-flat option alongside the new DriveGuard tyre and stresses that a run-flat tyre made to measure for a vehicle is always preferable.

Our tyre test involved driving identical cars on an 18km road route that featured a variety of surfaces. We had a choice of everyday cars to drive and opted for identical Peugeot 308s. One was fitted with the big-selling conventional Turanza tyre and the other with DriveGuard tyres. First up the Turanza delivered a quiet, comfortable and grippy ride and was well suited to the French hatchback. Next we fired up the DriveGuard-shod 308. The new tyre felt firmer but was quite close to the Turanza. It felt as if the Turanza was pumped a bit harder but was in no way harsh. Cornering felt, if anything, more sporty than the Turanza and in truth DriveGuard on the twisty sections felt a bit more sporty. DriveGuard’s innovative side wall construction felt less harsh than a standard run-flat.

The need for a TPMS system (legally required to be fitted on all new passenger vehicles since 2014) is for safety reasons. In day-to-day driving you might not know if you had a puncture to a rear wheel for example. The DriveGuard tyre does make a noise while driving punctured that is quite noticeable with the sound system off. Our test car had a front-wheel puncture and we found the steering pulled a little in its direction. On twisty, poorly surfaced roads we drove with a good degree of confidence and were aware of the softer feel of the punctured tyre through the steering.

The car braked well too. Potentially as with any run-flat tyre if you had a puncture and ran the car for long periods at high speed the tyre would overheat and ultimately fail, but DriveGuard’s unique construction generates less heat. It is worth remembering that if you drive gently there is a greater chance of the tyre being repairable.

DriveGuard does away with the need for a spare wheel, something that car-makers have been trying to do to save weight and reduce exhaust emissions. According to Bridgestone, drivers will experience on average six punctures in their lifetime, 27 per cent of all roadside emergencies are tyre related, while 72 per cent of women and 33 per cent of men won’t change their own tyre.

Extended mobility is the buzz catch phrase in the tyre world (yes, there is a tyre world!) and Bridgestone has stolen a march on its competition with a new run-flat tyre that can be repaired in the same way as conventional tyres. The DriveGuard tyre is a great safety innovation that will give peace of mind to drivers. It has an A grade for wet performance and a C for rolling resistance, which is up there with the best touring tyres available. The tyre goes on sale this April.

How technology and social media is undermining family relationships
6