Road Test: Space inside the Ford Galaxy is out of this world 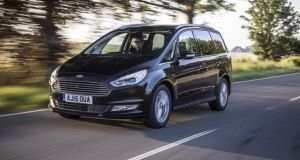 The Galaxy’s styling follows a familiar set of lines – in fact, were it not for the big grille and narrower lights at the front, you’d probably be hard-pressed to distinguish it from its predecessor 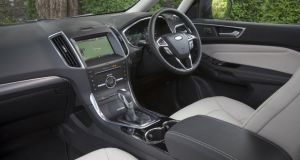 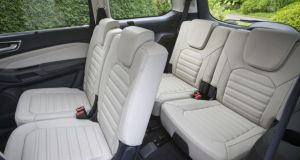 Passengers are well-served in the back. Space is excellent and comfort is pretty much as good as you get in the front row

I’ve often thought that former pilots of the famed Lockheed C-130 Hercules transport aircraft would feel right at home in a Ford Galaxy. A glance in the rear-view mirror seems to give a similar view as you’d get glancing over your shoulder from the cockpit of the big “Herc” – lots and lots of space leading to a loading door somewhere way behind you.

You half expect to turn around and see not your kids nestling in the rear seats but a load-master sergeant about to send a stick of paratroops on their way. Or Timothy Dalton dangling out the back dealing with a recalcitrant henchman. Or maybe I’ve just seen The Living Daylights too many times . . .

Whatever about my personal viewing habits, little has changed from the previous Galaxy to this. Rather like its astronomical namesake, from whatever point you observe it, there always seems to be a lot of it stretching out to the distant horizon.

Space, in this case, may not be quite infinite, but it’s certainly pretty big.

The Galaxy’s styling follows a familiar set of lines – in fact, were it not for the big grille and narrower lights at the front, you’d probably be hard-pressed to distinguish it from its predecessor. Perhaps to do so would be to expect rather too much from a big, square MPV, but it’s not entirely un-stylish.

Inside, much of the fascia and all of the switchgear has been ported over from the new Ford Mondeo and this is both a good thing and a bad thing.

On the good side, the overall sense of quality is very good – things such as an expensive- feeling steering wheel, neat-looking instruments lift the interior ambience of the Galaxy more than a little, and the big, comfy front seats are as close to motorised armchairs as you’re likely to find.

The centre console where the radio and HVAC controls lie is especially troublesome in this regard, and while the big screen and bright graphics of the SYNC2 infotainment system are nice, the screen itself is prone to reflections, and there are some very fiddly jigs and reels to run through to find needful bits of the menu.

In the back, your passengers are well-served though. Space is excellent (Ford claims 10mm more headroom than on the previous Galaxy and as much as 40mm more third-row legroom than some competitors provide) and comfort is pretty much as good as you get in the front row. There are three individual seats across the back, which will be a boon to parents struggling to get three child safety seats abreast, and all of them individually fold, tip and recline.

Ford also says that the seats move aside more than previously to make ingress to the third row more easy and less athletically challenging while the memory function means that the middle row locks back into place slightly further forward than it was before you moved it – to the benefit of third-row occupants’ knees.

The third row is where you’ll find the new Galaxy’s party trick, albeit an optional one. Waggle your foot under the rear bumper to trigger the (also optional) powered tailgate and you’ll find a little row of buttons. These can be used to trigger a simple mechanical tumble function for the middle row seats, which flip down easily.

Or, if you’ve paid for it, you can electrically raise and lower the third row. It’s a decently brisk movement, but one which you suspect your offspring will use to swiftly run the battery flat should you leave your keys unattended.

Ford is touting a lot of high-tech for the new Galaxy, from a speed limiter that reads roadside signs for you and makes the throttle harder to press, to a self-parking system and a radar that scans the road on either side when you’re reversing out of a space.

Ford has also worked hard to make the Galaxy as appealing to drive as its predecessor. There is new adaptive steering and lots of trick front suspension components, including electric power steering with “Active Nibble Compensation”. Stops the mice chewing on the wires perhaps? Whatever it does, the Galaxy follows the lead set by its lower-slung brother, the Mondeo – it’s smooth and reassuring to drive, with decent handling for one so large, but to me it feels notably less responsive and reactive than the old one.

The very pleasant ride comfort and the fact that the Galaxy comes with standard self-levelling rear suspension is probably of rather more importance to most of its potential users though.

Most Irish customers will go for the more affordable 150hp model, with the six-speed manual, but you won’t save much money in terms of running costs – there’s only 10g/km and €10 a year between the manual 150hp and the auto 180hp and the more powerful engine’s extra grunt would be both welcome and useful if you’re using the Galaxy’s space and seating to its utmost. There is a 150hp 1.5 EcoBoost turbo petrol option too, but expect only a precious few of those to be purchased.

It’s perhaps not a groundbreaking car, the new Galaxy, following closely the template set down by its predecessor. It’s functional, comfy, fine to drive and mildly more stylish than before.

As long as it avoids the early build quality issues we noted on the new Mondeo, it should keep its customer base of loadmasters and loadmistresses happy. The lowdown: Ford Galaxy 2.0 TDCI 180 Price: TBC. Range starts at €38,760

Simple shakshuka: spice up your mealtimes with this Middle Eastern dish
7

‘This is war’: Irish health workers on their Covid-19 crises
9