Prince Philip’s crash: Are older drivers a menace behind the wheel?

Reflexes slow and sight deteriorates as we age. But experts warn against blanket bans

The man who helped Britain's Prince Philip after his car flipped over following a crash with another vehicle, describes how he helped the 97-year-old escape the debris. Video: Reuters 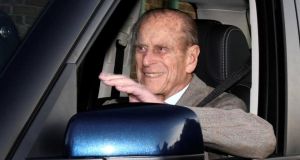 “A 97-year-old driver of an SUV escaped uninjured from a collision with another vehicle despite his Land Rover Freelander rolling over a number of times,” read one report of a road crash on Thursday. Its driver, who appears to have been at fault, was no ordinary pensioner but the British monarch’s husband, Prince Philip.

He had been leaving the grounds of the royal family’s 20,000-acre Sandringham estate, in Norfolk in eastern England, when his four-by-four hit a Kia MPV whose three occupants included a 10-month-old. The baby was uninjured, but the child’s mother, who was driving, and her other passenger required hospital treatment for cuts and bruises and a broken wrist. Philip had to be freed via his sunroof.

The crash has raised the question of how old is too old to drive on public roads.

More than four million over-70s in the UK have a driving licence, and they must reapply every three years, by self-certifying their sight is good enough to read a numberplate at 20 metres, and that they have no medical condition that prevents them from driving.

In Ireland,  the reapplication procedure for over 70s includes a medical test by a  GP or another doctor, and it applies to peoples over 70 who are among the 45,000 drivers who were never tested and simply given full driving licences in the 1979 test amnesty.

Should licences be made harder to renew once you’re over 70? According to James McAllister, retired head of the Garda road-safety unit, “a generalisation based on age is not the way to go with drivers and their competence to use the road. A good driver is a good driver and a bad driver a bad driver.

“We should be careful not to make generalised statements without empirical evidence to support such statements, be it about age, gender or driver types. In relation to the older population, GPs must take their responsibility seriously in certifying the fitness of older drivers.”

McAllister says that although our physical and mental ability may deteriorate with age, there is no evidence that people driving beyond a particular age are a greater or lesser risk than other road users.

“Where there is a collision the guards will conduct the investigation and determine the cause based on evidence, and deal with each situation in accordance with the evidence. Rarely is excessive or inappropriate speeding an issue with older drivers.”

Prince Philip’s collision is under investigation by Norfolk Constabulary, which will then decide what action to take. It has already said alcohol was not a factor for either driver. Philip reportedly blamed the glare of the sun. Were he to be found guilty of driving without due care and attention, he could receive up to nine penalty points and be fined in line with his disposable income; there is no limit on how big the fine can be. An alternative punishment is more likely.

In the UK it is common for police to ask older drivers to surrender their licences to avoid prosecution after a minor single-vehicle incident. Prince Charles, Philip’s eldest son, has tried to persuade him to give up his keys, but without success.

Many adult children have similar experiences. My family managed to ween our late mother off her car when her health began to fail – but not before a telltale wing mirror or two were damaged.

Older drivers often hang up their keys when their confidence behind the wheel fades. Before that they might avoid driving at night, on motorways, in poor visibility and in bad weather. Junctions and manoeuvring will have become more challenging for them – testing the patience of other road users, who are often less than understanding.

Tony Toner of the Institute of Advanced Motorists of Ireland says: “We have to avoid stereotypes. Yes, reflexes slow and other physical attributes start to fail, but each individual is unique. At IAMI we run confidence assessments of drivers who are concerned about their driving. Sometimes they are referred by a relative. It gives a little distance and can make hanging up the car keys a little easier if needs be.

“Often older drivers drive less, and their reading of road situations can become a little rusty. For drivers with a lifetime of experience, giving up the keys might be the wisest step they’ve taken in their driving life.”

Police say sudden-acceleration syndrome – when a driver who is trying to stop mistakenly presses hard on the accelerator pedal instead of the brake – causes many collisions involving older drivers.

Technology could help avoid such incidents. Auto emergency braking, for example, will slow a car down to prevent a collision even if the driver has his foot on the accelerator. A cross-traffic alert system can also apply the brakes if somebody walks or drives into the path of a reversing vehicle.

Unfortunately, Prince Philip’s Land Rover was designed with neither of these advanced safety features.

Speaking over Christmas 2018, Minister for Transport  Shane Ross said he felt there was no need to introduce a requirement for older drivers to re-sit driving tests, saing that older drivers were among the safest on the roads.

The kitchen smells of rum. Either my old dear is over or Sorcha’s baking a Christmas cake
4