Motoring gears up for bright and brave new world

Connected cars set to transform how our insurance premiums are determined 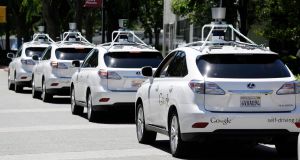 Auto industry analysts, IHS Automotive, forecast total worldwide sales of self-driving cars to grow from about 230,000 in 2025 to 11.8 million by 2035. Photograph: Eric Risberg/AP

Like it or not, today’s connected cars are generating vast amounts of data that could conceivably be used in other aspects of our lives – to determine car insurance premiums, for example.

As the potential of connected car and automated driving unfolds, car insurance is one area where these technologies could cause a seismic shift. Currently, insurance is predominantly priced on a pooled rather than an individual basis. As a result, certain groups, such as young male drivers, pay more because they are collectively seen as higher risk.

With connected car, individual driving behaviour can be easily captured, making it possible for insurance companies to refine the risk based on actual driving habits.

According to one Irish-based senior insurance executive, connected cars “could transform how the sector does its business because instead of setting premiums based on crude historic data related to poorly defined subsets of sex, age and location, premiums can be related to real-time analysis of how and where you drive.”

“There are several benefits from self-driving cars to society, drivers and pedestrians,” says Egil Juliussen, principal analyst for infotainment and autonomous driver assisted systems at HIS. “Accident rates will plunge to near zero for SDCs, (although other cars will still crash into SDCs), but as the market share of SDCs on the highway grows, overall accident rates will decline steadily.”

Toyota plans to offer automated driving by 2020 starting in Japan. Jeff Owens, CTO of Delphi, the world’s largest producer of autonomous driving technologies, says that while elements of the technology, such as lane assist and anticipatory braking are already available and in use, fully automated cars are still about a decade away.

Europe operates quite a traditional insurance model. The US already has pay-as-you-go insurance priced according to where and how often you drive. If your driving is mainly outside busy city areas, for example, you pay less. If you only use your car once or twice a week to do the shopping, you pay less.

Connected car is going to make it much easier to offer this type of cover in all jurisdictions. Far-fetched? Industry experts don’t think so. With no one quite sure what to expect of the super smart cars promised by Google and Apple, the global insurance industry is watching developments in connected cars every bit as closely as the auto industry.