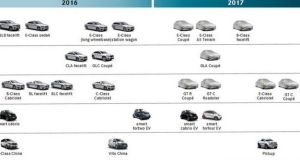 A leaked document has revealed Mercedes-Benz’ model plans for the next 12 months and almost predictably it includes an absolute explosion in SUVs and crossovers.

The coupe version of the well-received GLC has already been revealed and will be on sale shortly, but there is also a coupe version of the smaller GLA due in early 2017, which will act as a premium-class rival to the likes of Volkswagen’s planned Tiguan coupe and the inevitable BMW X2.

The E-Class lineup is also expanding. The estate version is about to go on sale, and there’s a long-wheelbase saloon variant too, but that’s just for the Chinese market.

More intriguingly, Mercedes has confirmed that it will launch an E-Class ‘All Terrain’ – a pseudo SUV version meant to compete with the Audi A6 Allroad and forthcoming Volvo V90 XC. With added ride height, 4MATIC four-wheel drive and off-road assistance systems, it’s meant to appeal to those who need the extra traction and rough-road ability, but don’t fancy a tall SUV. Such vehicles sell in huge numbers in the US and continental Europe, as well as the UK, but here in Ireland they’re more of a sideshow. According to figures from Motorcheck.ie, Audi sold just 13 A6 Allroads here in 2015.

Mercedes may have a different customer in mind for the E-Class estate though. Right the way back to the seventies, with the launch of the original W123 TE model, Mercedes has always offered the option of an extra pair of rear-facing seats in the boot of the E-Class Estate. It’s not a perfect solution for all, obviously – it means kids’ legs and feet will be where you want to usually put bags and suitcases and only smaller children will fit. But for some of us, it’s the squaring of the circle of having too many kids, but too little affection for MPVs.

With no seven-seat MPV in the current Stuttgart lineup, it’s an opening which Mercedes-Benz Ireland has confirmed that it will be exploiting, or at least trying to, with the new generation of E-Class Estate. Mercedes candidly admits that it has sacrificed a little space for some racier styling, which might help along a few Irish buyers who are as wary of the cultural signals sent out by an estate, just as they are of an MPV. Seats-up boot space has fallen from 695-litres in the outgoing, cavernous E-Class Estate to 670-litres now and that’s for versions not fitted with the exhaust-cleansing AdBlue tank. With AdBlue, the space falls again to 600-litres, while seats-flat space has fallen even further, from 1,950-litres to 1,820-litres.

Nevertheless, the extra rear perches are available as an option, and Mercedes-Benz Ireland’s sales director Ciaran Allen told The Irish Times that the family market is well inside Merc’s crosshairs. “The seven seat option in our new E-Class Estate will be a really popular option, and we will certainly be using this unique selling point, in this segment, to promote its versatility and practicality of our new model arriving in September this year. When the seats are not in use, they fold completely away under the loading area” said Allen.

“It’s a very popular option on new models and most of our dealers would initially create their Estate stock with seven seats because in three years they want models with seven seats being traded back in. It really is in demand from customers of three, four and five year old E-Class Estates.”

What about the ultimate question though – safety? Are kids really safe in a pair of little flip-down seats in the boot? Mercedes claims that they are, and Ciaran Allen said: “Mercedes-Benz carry out their own stringent safety tests on all models, but they also submit all models for testing at Euro NCAP which covers all variants including models and Estates with seven seats.”

Certainly Mercedes’ record on safety is close to peerless, and the Germans have developed a bespoke child car seat, for ages four to 12, in co-operation with Britax, specifically for the new E-Class.

Other new models on the way include a convertible version of the rip-roaring AMG GT coupe (as well as a facelifted version of the coupe model and the 577hp R version too) while towards the end of the 2017 we’ll also see the new E-Class Coupe and a mild facelift for the S-Class. And then there’s the pickup – putatively called GLT, and based heavily on the architecture of the Nissan Navara (and therefore also that of the upcoming Renault Alaskan) the GLT will take Mercedes for the first time into the one-tonne pickup market.

It will be going up against the Renault and the Nissan, but also deeply entrenched competitors such as the Toyota Hilux and the Volkswagen Amarok. Mercedes has a long history in hard-working commercial vehicles but the GLT is said to be much more luxurious, refined and car-like than is the norm for such vehicles. It has even prompted BMW to tacitly admit that it too might consider creating a crew-cab pickup. Watch this one-tonne (load)space…

Meet Ireland’s new farmers: ‘People laughed at us when we started growing snails’
9