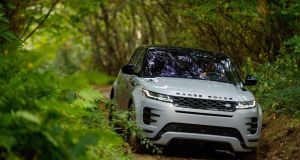 On the surface, the influence of the Range Rover Velar is clear - the headlights and tail-lights are almost a direct lift from Land Rover’s mid-size luxury SUV, and so too are the pop-out door handles

Land Rover has unveiled a carefully evolved new model of its big-selling Evoque SUV, one calculated to gently nudge the car forward, rather than change it utterly. It’s a delicate balancing act for Land Rover. The brand has lost 2.9 per cent of its sales this year so far, and has seen total group sales, combined with sister firm Jaguar, fall by 2.6 per cent. Wherever the blame can be laid - sluggish Chinese sales, US trade worries, Brexit, or an over-reliance on diesel power, the fact is that Land Rover (and Jaguar) must boost its sales and do so quickly. Quarterly losses of STG£210-million cannot be long sustained.

Which is why the new Evoque has been so significant. Land Rover has sold 274,000 cars so far this year, globally (correct to the end of August) and more than one third of those have been Evoques. Even in its run-out year, the Evoque remains a big seller for the brand, and something of a cash cow. Hence the gentle evolution.

On the surface, the influence of the Range Rover Velar is clear - the headlights and tail-lights are almost a direct lift from Land Rover’s mid-size luxury SUV, and so too are the pop-out door handles and the aggressively styled air intakes in the front bumper. The Velar has had even more influence inside, where the two-level touchscreen system has been carried over both from the Velar and the Jaguar I-Pace, as has the digital instrument pack.

The overall shapes, the silhouette, the feel, is still very much Evoque, though. Those existing customers won’t be put out nor put off, but whether the design retains sufficient attention-grabbing abilities to keep attracting new buyers remains to be seen.

There is some attention-grabbing tech, though. The Evoque will be the first Land Rover vehicle to feature a 48-volt mild hybrid system, something that’s seen as crucial to start weaning LR buyers off diesel, and retaining customers based in major urban centres, who are feeling that their diesel-driving days are under threat. The mild hybrid powertrain works by harvesting energy normally lost during braking thanks to the engine-mounted belt-integrated starter generator, storing it in the under-floor battery. At speeds below 17km/h, the engine will shut off while the driver applies the brakes. When pulling away, the stored energy is redeployed to assist the engine under acceleration and reduce fuel consumption. The result, claims Land Rover: “is a refined, quiet and efficient drive in built-up traffic heavy areas, in addition to efficiency savings.”

It’ll be based around a version of the current four-cylinder ‘Ingenium’ engine family, and Land Rover claims that it will offer 149g/km Co2 emissions and 50mpg fuel economy on the new WLTP emissions and fuel tests. That powertrain will be available from launch, and in 2020, a plugin-hybrid, using a three-cylinder, 200hp, version of that engine, with even-lower emissions (circa 45g/km), and the ability to run on pure electric power, will join the Evoque range. In the meantime, the lowest-emissions model will be the carried-over 2.0-litre 150hp diesel, with emissions of 143g/km.

Being a Land Rover, there’s an emphasis on genuine off-roading ability, even if that’s something that few customers will ever really use. In spite of the Evoque’s on-road bias, more than 80 per cent of buyers choose four-wheel drive models, in keeping with the brand’s history. This time around, that’s backed up with the latest Terrain Response 2 electronic traction control systems, and an increased wading depth which means that, as standard, the Evoque will be able to tackle up to 600mm of standing water.

Other features include a rear-view mirror that, if your view behind is blocked by luggage or passenger’s heads, can switch to a video screen view, using a rear-mounted camera. It has a wider field of vision than a conventional mirror, and apparently works better in low-light conditions.

The Evoque will also be the debut car for Land Rover’s ‘transparent bonnet’ technology, which uses forward and downward-facing cameras to project an image of what’s under and immediately in front of the car onto a screen, allowing for easier manoeuvres in tight spots. Meanwhile, Land Rover is upgrading its InControl touchscreen system to have Apple CarPlay (at last) connectivity, as well as a wifi hotspot. That has been one of the weaknesses in the range to date.

Underneath, the new Evoque doesn’t get an expensive aluminium platform (as used by the larger Land Rover models) but instead sits on the same steel-based platform as the outgoing model, the Discovery Sport, and the Jaguar E-Pace. Although much-modified, that means this is a chassis that can trace its lineage back to the second-generation Land Rover Freelander and, by association, the 2006 Ford Mondeo. While the Evoque’s overall length hasn’t changed, the wheelbase is some 20mm longer, which should improve rear seat space, and the boot has expanded to 591-litres.

UK prices for the new model have been announced, starting at £31,600 (€35,730) which is a little more expensive than the most basic current model, so expect a modest price rise for Irish customers when the Evoque II goes on sale early next year.