When is an Evoque not an Evoque? Perhaps when Chinese firm Landwind offers its take on the crossover market 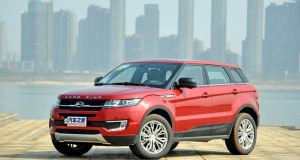 No it’s not he Land Rover Evoque - this is in fact the Land Wind X7, though we can see how you might be confused

If you put a Range Rover Evoque and a Landwind X7 next to each other, frankly Maurice Wilks would be hard pressed to tell them apart. The Landwind seems to be the latest in a long line of products, from cars to computers to phones to watches, which suggest that the Mandarin concept of intellectual property is somewhat more elastic than it is here.

With the X7 on display at the Shanghai motor show again this week, it had been expected that Land Rover would be wheeling out fewer attractive show stand hostesses and rather more heavily-built copyright solicitors. But Landwind has told Autocar magazine that it has still had no complaint from Land Rover about the car.

Speaking to the magazine last year, Land Rover boss Ralf Speth had been unequivocal: “The fact that this kind of copying is ongoing in China is very disappointing. The simple principal is that it is not something that should happen; the Intellectual Property is owned by Jaguar Land Rover and if you break that IP then you are in breach of international regulations that apply around the world.”

It’s possible though that Land Rover has decided that it’s just not worth the effort. According to others, including the likes of VW and Bentley, there’s no point in worrying about the knock-off artists, as customers for premium brands tend to seek out the genuine article and not be distracted by the fakes. That’s in spite of the X7 having roughly a €35,000 price advantage over the Evoque.

Previously, BMW had tried to take a court action against Shuanghuan Automobile, whose CEO model was said to be a carbon-copy of the 1999 X5. BMW won its case in a Munich court, but subsequently had the case thrown out when the Chinese authorities weighed in and said that the CEO looked nothing like an X5. We suggest you Google-image that one and judge for yourself.