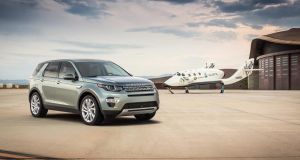 Not content with merely launching a new vehicle, Land Rover has decided the arrival of the new Discovery Sport warrants the launch of four of its customers. Into space.

Thanks to its tie-up with Richard Branson’s Virgin Galactic, Land Rover is asking fans of the new Discovery Sport to spend the next four months posting adventurous videos of themselves online, which demonstrate why they would be the ideal candidates to be the world’s first 4x4-fan space tourists. The four winners will be announced in December and will be given the chance to take a flight on Virgin’s SpaceShip Two, a sub-orbital rocket designed for Branson by legendary aeronautical engineer Burt Rutan.

Back here on Earth, space is also something of import to the Discovery Sport, as it not only has to replace the outgoing Freelanders (one of Land Rover’s best-selling cars of all time) but will also have to take on the challenge of such premium players as the BMW X3 and Audi Q5. With the closely related Range Rover Evoque also being effectively an in-house rival, the Discovery Sport is laying itself out as a spacious family car, rather than the more selfishly stylish Evoque.

With that in mind, the Disco Sport will come as standard with a 5+2 seating layout that keeps a pair of flip-up occasional seats in the boot. Land Rover is, it seems, aware that such seats will be tight on space and only for short hops, so has held back from describing the Discovery Sport as a seven seater.

Using the same 2.2-litre diesel engines as the current Evoque (although these are due to be replaced in short order by the range of 2.0-litre “Ingenium” engines being developed) the Discovery Sport will go on sale in January 2015.

“Not only does Discovery Sport mark the introduction of the first new member of our expanding Discovery family, it also brings the versatility of 5+2 seating to the compact premium SUV market,” said Phil Popham, Jaguar Land Rover Group marketing director.