As the classic race turns 90, Murphy Prototypes is entering for the second time 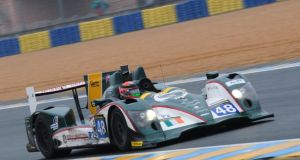 Murphy Prototypes: the team hopes to improve on last year, when it was forced to retire with a broken suspension

Irish motorsport will be represented at this weekend’s Le Mans 24 Hours, with the Irish-owned and -operated team Murphy Prototypes taking part for the second year in the 90-year-old endurance race, which begins on Saturday at 3pm.

Run by a Dublin businessman, Greg Murphy, the team hopes to improve on last year, when it led its class for five hours before being forced to retire with a broken suspension. This year the team is running a Nissan Oreca 03 car in the LMP2 class, which has 22 entries. Its three drivers are the former Formula 1 driver Karun Chandhok, Brendon Hartley of New Zealand and Mark Patterson of the US.

Irish motorsport is also represented on two other race teams. John O’Hara of Kildare is deputy managing director of the Asian motorsport team KC Motorgroup, which is making its Le Mans debut this weekend in its Morgan-Nissan LMP2 car. The Irishman and former international race driver David Kennedy is involved with the Status GP team, which for this year’s race is running a Lola B12/80.