Korean firm has created a dynamic i20 that Toyota, Peugeot and VW need to take note of 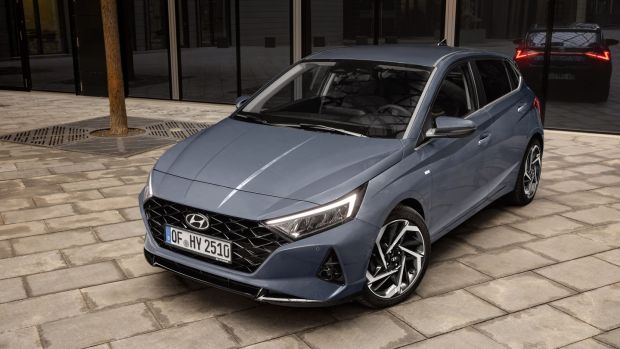 Impressive: Hyundai’s new i20 is on par with the class-leading Peugeot 208 in terms of driving dynamics

Hyundai’s evolution from sober to stylish seems to be in hyperdrive. On the back of a massive leap with the Tucson, and a striking new revamp of the Santa Fe, the i20 is yet another model in the Korean carmaker’s range to get a rebirth.

This is the third generation of the i20 supermini, a format of family car that deserves a lot more attention from Irish buyers than it’s getting right now.

Motorists are fixated on mock SUVs; it’s not an Irish phenomenon but a global one. We can repeatedly point out that these plastic-clad emperors are barely dressed, but no one cares to listen. Toyota’s latest new model iteration sums it up: a crossover-styled Aygo. Come on folks.

In fairness Toyota is only responding to the market demand and Hyundai is not one to miss a trend either, with its new Bayon compact crossover on the way. The Bayon is based on this new i20, but with crossover touches and a front nose that looks like an update to one on the current Kona. In short, it’s got all the attributes to be a sales hit, overshadowing this new i20 supermini, if the price is right.

But for now our focus is on the supermini and – rightly so. Aside from the market’s SUV fixation, the other great chatter in the car world is about electric and hybrids.

Yet this new i20 is offered in Ireland with just two petrol engine options: a 1.2-litre 84hp five-speed manual or a 1-litre 100bhp automatic. Is Hyundai Ireland missing a trick?

Across the top 10 best-selling superminis on the Irish market this year, 81 per cent of sales are for petrol cars, 15 per cent hybrid, 2 per cent electric and just 1 per cent diesel. Perhaps Hyundai – which must take some of the blame for turning family buyers on to SUVs with its Santa Fe – is correct to turn a deaf ear to this particular trend for now.

So what’s the i20’s 1.2-litre 84hp petrol engine like? Surprisingly sprightly. Of the supermini petrol engines out there, it’s up there with the Ford Fiesta’s smart little 1-litre 100hp Ecoboost and Volkswagen’s 1-litre 80hp engine. None of these cars are particularly fast off the starting blocks, but the new i20 feels a little more reactive than many rivals and less noisy thanks to its four-cylinder format.

Particularly in urban environments, it’s quick to respond and relatively frugal. Overall, the i20 1.2-litre petrol has an official WLTP fuel economy of 5.3 l/100km (44.4 mpg). That’s not hybrid figures, but it’s nothing to complain about.

Where it starts to show some signs of fading is on the motorway and perhaps that’s where rivals seem to have an edge. The five-speed transmission works well at lower and mid-revs, but it would be nice if there was less gearstick travel between changes.

That said, once more Hyundai’s chassis engineers have come up trumps. Here’s a Hyundai i20 that’s fun to drive on the twisty bits of roads. I didn’t expect to write that.

In the past, even the driver felt like a passenger in the Korean carmaker’s supermini cars, but this new version is happy to nose into a corner at the flick of the steering wheel and keep its line through to the straight bits on the other side. It’s well behaved on various types of Irish roads and while the rear sometimes feels a little light on the bumps, that’s a feature of many cars in this class.

In terms of driving dynamics, the i20 is edging it with the Peugeot 208 and Toyota Yaris and seems ahead of rivals like the VW Polo and Renault Clio. That’s a pretty landmark moment for a car that up to now was firmly ensconced among the also-rans in this class.

In practical terms, luggage space is among the best in class and better than the Yaris, Fiesta or Polo, and adults won’t struggle to get in and out of the back – and it’s in here that you start to appreciate the increase in size over the last generation of i20. As with rivals, the latest fleet of superminis has the sort of interior space you’d find in full-sized family hatchbacks of the last decade.

In keeping with smarter styling on the exterior, the inside has also been given a revamp, dominated by a new very intuitive touchscreen and well laid out controls. That said, it’s not as smart as some rivals, such as the Peugeot 208 or VW Polo. Hyundai designers have mastered the exterior styling but they could add a little more colour and fun to their supermini interior trims. Like the Toyota Yaris, there’s just a tad too much black plastic in here.

Hyundai offers a five-year unlimited mileage warranty and that’s undoubtedly a lure. In terms of specification, while the entry grade Classic version at €17,495 is well equipped with safety features like lane “Keep Assist” and road edge identification, stepping up to the Deluxe at €19,495 adds the 8-inch touchscreen, Android Auto and Apple CarPlay, the digital driver’s cluster and wireless phone charging to name but a few. When pitched against rivals with equivalent tech, the current €2,000 price walk seems a good move and makes the car seem competitively priced.

Put all the package together, and the new i20’s suddenly right in the mix against several stalwart rivals that would have left it for dead in the past. The Peugeot 208 would still have an edge for us, though in terms of dynamics the new Hyundai is cutting it very close. The Hyundai playbook is being rewritten at present and the old guard need to be wary of being overtaken.