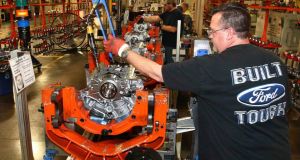 A Ford assembly line worker. Ford continued to lose money in Europe and in South America, while being profitable in Asia as well as North America. Photograph: Reuters/Aaron Josefczyk

Ford yesterday reported a 34 per cent drop in third-quarter earnings, and revenue fell due to the cost of introducing the F-150 pickup truck.

Ford continued to lose money in Europe and in South America while being profitable in Asia as well as North America.

The loss in Europe widened to $439 million from $182 million a year ago, mainly due to weakness in Russia.

Ford continued its gains in China, where it reached 4.7 per cent market share, its highest yet.

Ford’s profit margin of 7.1 per cent in North America lagged the 9.5 per cent that rival General Motors reported on Thursday. Excluding recall costs, Ford’s margin would have been 10.2 per cent.

Ford last month warned that its pretax profit this year would be $6 billion, down from a previous forecast of $7 billion to $8 billion, and that recall costs in North America would be $1 billion. About $630 million of those costs came in the third quarter.

“No compelling new reason to either buy or sell the stock,” Morgan Stanley analyst Adam Jonas said in a research note. “On the substance of the results and outlook itself, we don’t believe consensus forecasts need to change materially.”