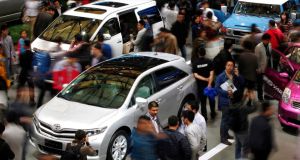 Toyotas at the Shanghai automobile industry exhibition. The company is likely to miss its objective of selling more than 1.1 million vehicles in China because of a faster-than-anticipated economic slowdown. Photograph: Carlos Barria/Reuters

Nearly 8,000 new cars were registered in the first six days of the year, up 30.5 per cent on the same period last year.

There were 7,922 new cars registered by the end of January 6th, with Toyota the top-selling brand on 1,195, followed by Hyundai with 919. The Korean firm pushed Ford into third place with its 825 new car registrations and Volkswagen into fourth with 589.

Figures released by car history website motorcheck.ie show the Ford Focus is the best-selling model for the new 151 numberplate over the first six days, followed by Hyundai’s IX35 crossover and the Toyota Corolla.

According to Michael Rochford, managing director of Motorcheck.ie: “The year has started really positively again for the motor trade with sales figures well up on last year. Most commentators are predicting between 105,000 to 115,000 new cars sold in 2015 and if the year continues on the current trend the industry should easily hit or exceed the higher end of that spectrum.”

A spokesman for Volkswagen said January was traditionally a little slower in the first few days for the brand as it has fewer dealers than some of its main competitors, while it was also awaiting the arrival of the new Passat, which will not begin volume deliveries until the middle of the month.

He said the German brand had noted strong commercial vehicle sales in the first few days of this year, which it sees as a bellwether of improvements to the economy.

“Aside from very strong fleet sales, retail customer registrations for Volkswagen commercial vehicles – to customers like plumbers, carpenters and small business owners – are up by 85 per cent. That in itself says a lot about a cautious renaissance of the Irish economy.”

Comfort eating your way through the pandemic? You’re not alone
5

Married to Gene Kelly: 'He didn't seem that old to me'
8