First Drive: Could the F-Pace be Jaguar’s Qashqai? 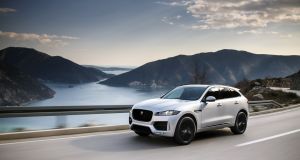 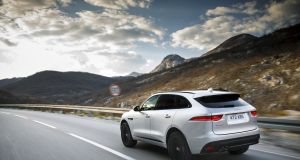 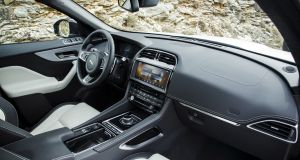 In many ways, this car should not be here at all. After all, when Ford bundled then-ailing Jaguar together with successful Land Rover in order to be able to divest itself of both car brands, the theory was that Jaguar’s all-saloon and sports car range would be perfectly complimented, and not poached upon, by Land Rover’s all SUV and 4x4 range.

But the power of the SUV right now is all-encompassing. Indeed, in many ways, they are the only cars that truly sell in large numbers. And just as Nissan did with the original (and subsequent) Qashqai, and as Hyundai has found with the new Tucson, the right SUV at the right time can utterly transform the fortunes of a brand.

It’s not as if the current Jaguar range lacks any appeal. The XF saloon is fantastic to drive, the XE saloon likewise and the F-Type sports car is utterly bewitching. But the addition of this new F-Pace crossover SUV could really change the Irish car buyer’s perception of Jaguar, which is still, erroneously, thought too often to be a more expensive, more delicate car to run.

For starters, it’s handsome and better looking by far than the Audi Q5, Mercedes GLC or Porsche Macan, which are its closest rivals. It’s certainly not just a pretty face either; Jaguar’s engineers have carved out some seriously practical space inside, so you’ll find rear seats with plenty of leg and headroom and a large boot.

The front seats are exceptionally comfortable too but I do think that the cabin lacks a little pizzaz. It’s made with obvious care and attention to quality but it lacks the sheer stylish impact that Mercedes currently brings to the interior design party.

Still, there are some highlights in here. The new InControl Touch Pro infotainment system is seriously impressive – attractive graphics, fast-reacting operating system and a big, bright 10-inch touchscreen. Jaguar at last has a setup that can rival those provided by BMW and Audi.

On the heavy engineering front, the F-Pace uses similar, mostly aluminium construction, to that of the XF and XE, although it’s claimed that only about 19 per cent of parts are carried over. It’s hardly a featherweight, at 1,775kg at the kerb (that’s for a 2.0-litre diesel with four-wheel drive, likely the best-selling model) but perhaps it has avoided the worst effects of bulking out.

Actually, that 2.0-litre diesel is really the pick of the range. We got to try the 3.0-litre supercharged V6 petrol (380hp, lifted from the F-Type and with a hilariously aggressive exhaust note) and the 3.0-litre V6 diesel (700Nm of torque is lovely, but it’s heavy on the nose) but the 2.0-litre “Ingenium” diesel really is the sweet spot of the range.

With 180hp and 430Nm of torque, it certainly has the get up and go appropriate to a car that boasts such a sporting pedigree, but crucially it also feels lighter on its toes and more responsive to steering than either of the V6-engined models.

On 20-inch wheels, the V6 diesel also felt too choppy and prone to a bad case of the fidgets but the same wheels on the 2.0-litre diesel felt fine – firm, and you wouldn’t want to take too many liberties on a truly awful road, but about comparable with a BMW X3 in terms of ride comfort.

Where the F-Pace really surprises is in its off-road ability. Clearly, some genes from Land Rover have seeped across the factory floor in Solihull, near Birmingham, where the F-Pace is built and it tackled some rugged mountain goat tracks and some steep ascents and descents with true effortlessness.

Perhaps it was better, though, on the way down to Kotar on the Montenegran coast, where the narrow road drops down a precipitous staircase of tight hairpins, like a Monte Carlo rally stage on acid.

Here the F-Pace revealed its only obvious dynamic flaw – brakes that are, for the V6 models at least, simply not confidence-inspiring enough and need more immediate bite at the top of the pedal travel.

Estates, sadly, just don’t seem to fire imaginations in the way that SUVs do, and so the F-Pace is likely to meet with much more significant sales success. Jaguar Ireland has plans to sell about 220 in a full year, but given how good a car it its, I think that might be rather pessimistic.

It would be foolish to predict an opening of Irish Jaguar sales floodgates, but this is a car with massive appeal (and a less than massive price, starting at €44,100) and as Jaguar and Land Rover have plans for a nationwide network of 10 conjoined dealers, it could well be tempting an awful lot of customers to abandon their German wagons. Frankly, on this showing, it deserves to.