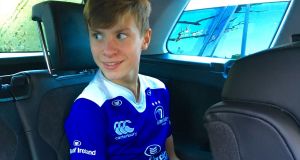 Noah was impressed with the back space legroom 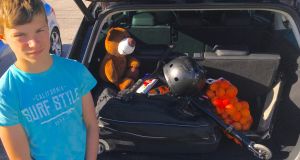 The load-lugging capacity of the Skoda Kodiaq 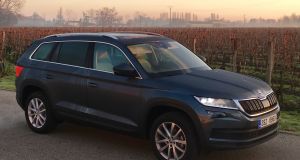 The Kodiaq hits our shores next March and the chance to rack up some serious mileage in this pivotal machine was not going to be missed. 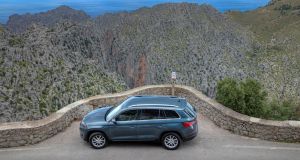 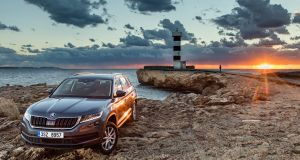 A father and son road trip is an event not to pass up. Noah, at 13 is my youngest and unlike his sisters, is a real motor head. He keeps me on my toes and God help me if I ever get a car stat wrong. He especially loves performance cars and is more knowledgeable than many motoring hacks (wipes proud tear).

Thankfully our relatively modest transport on this occasion met with a nod of approval as he glanced at Skoda’s brand new SUV.

Day one consisted of hundreds of kilometres but only a few were on road. A brief drive through Palma, with a right turn at the historic Cathedral and we boarded a Transmediterranea car ferry to Barcelona. We departed at midday and landed at 7:30pm. Not much test driving to be honest but it was time we could use to consider the Kodiaq’s looks.

The Kodiaq hits our shores next March and the chance to rack up some serious mileage in this pivotal machine was not going to be missed. We flew to Palma in Mallorca where the Skoda’s European test drive programme was winding down. Our road trip home would begin on a Wednesday morning with us scheduled to arrive in Rosslare harbour the following Saturday at lunchtime.

Five and seven seat Kodiaqs will be available with 70 per cent of buyers in Ireland expected to choose the seven seat version.

Engines from launch will be either 1.4 litre TSI petrol or 2 litre TDI diesel, both with a couple of power outputs.

We had a choice of two variants for the duration of the road trip. First up we took a 150bhp diesel, front wheel drive only, seven seater. Our test car was fitted with a dual-clutch DSG automatic gearbox.

The Kodiaq design takes its inspiration from the Skoda Vision S prototype. I drove the €1 million Vision S concept car some months back and was impressed by the level of detailing. The core of its design inside and out was rooted in very well considered Bohemian history.

While the Bohemian crystal used in the concept car may have morphed into a more affordable Perspex, Kodiaq continues on from the Superb with an exterior elegance that must make Skoda’s parent company Volkswagen jealous.

The shape is instantly likeable without being remarkable. It is a handsome bus but it has no automotive design revolution or pretence to its appearance.

That’s a problem with a lot of SUVs - they all look the same - but it does mean this Skoda looks every bit as good as its much higher-priced premium SUV rivals.

SUVs can never be great people carriers due to the need have greater ground clearance and a relatively low roofline. This can make it a bit of squeeze in the furthest seats. Yet in the seven-seater the last two seats impressed Noah, although his old dad found it a real struggle to gain access. That third row is realistically only for the young or double-jointed.

The middle seats can slide 180mm to allow for pretty good legroom. With seven seats up the boot shrinks from a massive 630 litres to a modest 270 litres. Fold all the seats down and there is over 2,005 litres. With seven seats in place I was still able to load a full sized barrel bag sideways plus a few other things and close the electric tailgate.

The five seat only Kodiaq has a whopping 720 litres of boot space expandable to 2,065 litres. And if you need to tow Kodiaq has an impressive up to 2.5 tonnes (braked) ability.

Back on the road and a night drive through Barcelona brought us to our overnight stop. The next day we were up and out on the road by 8am as we needed to cover around 700 kilometres.

Noah had spotted a skate park near the beach and I’ll dialed it in to the Sat Nav. We didn’t use the auto parking function but made full use of the 360 surround camera system. The Kodiaq dash features a nicely integrated centre touch screen that also features two large conventional dials. The main instruments are conventional dials with a centre display screen dividing them, there is potential for a more high tech digital display in future models.

Connectivity is good thanks to the latest system that allows data SIM cards to be used to create a wireless hotspot. Our cars were fitted with an Irish SIM card with our data connection we could use high quality imagery in our sat nav with Google Earth and Street. Smartlink+ features Apple CarPlay and AndroidAuto smart phone integration too. Phonebox induction charging is available also.

Noah has circus performer talents and his scooter got a good workout. Following a quick hot chocolate we headed north via Girona to the boarder with France and crossed it at noon. Adaptive cruise control was a useful friend on the motorway as we cruised towards our overnight destination with only slight wind noise audible in the well appointed cabin. Our route skirted Perpignan, Toulouse and then it was on to Saint-Émilion, to the east of Bordeaux.

Our overnight stop was at the very pretty Grand Barrail Chateau Hotel.

A frosty morning allowed me to use the remote heating option that is on higher trimmed cars. Today Noah and I would be driving a five seat, 150hp, TSI petrol with a DSG gearbox and 4X4 all wheel drive. Hill hold control, snow and off road 4X4 modes featured. Our test car also had dynamic chassis control DCC that essentially allowed us choose how stiff the suspension was. Not surprisingly the comfort setting was soft and sporty setting firm. The default normal setting would be our main preference for the day.

Another 700 kilometre day would be a good test of the cars range. Kodiaq gets all the little touches that help make Superb such a brilliant car. The boot light is magnetic and removable so it can double up as a torch when changing a wheel, but there is also the ice scrapper in the fuel filler cap and, of course, the front door mounted umbrellas.

New, are door edge protectors that pop out when you open the door and protect the paintwork. A sleep comfort pack is a neatly packaged blanket and head rest adapter that stows under the rear passenger’s legs.

Noah hooked up an iPad to the optional mount behind the passenger seat and connected the power cable to the socket on the transmission tunnel and from there he would be the middle row critic for the day.

He was impressed by the recline angles he could set the seat to and the comfort of the centre armrest. The optional rear seat back trays with their nifty pull out cup holders impressed too as did the rear heated seat option. By the end of the day Noah proclaimed the middle seats the most comfortable he had been in for quite some time - high praise.

The front seats offer good support. I had no ill affects after two back to back 700kilometre days driving. We got to Cherbourg with a few kilometers of range left. Motorway cruising doesn’t help with mpg but still the 1.4 litre with its 250nm of torque never felt short of breath despite hauling over 1.6 tonnes. The 150hp TDI with its 340nm is much more economical and flexible but we will see demand rise for petrol SUVs slowly in the coming years.

Skoda says 95 per cent of Kodiaq’s sold in Ireland will be diesel. The 150hp TDI 4X4 will account for 55 per cent of sales. It is hoped Kodiaq will be close to the Superb Combi that starts at €28,750 for the 125hp 1.4 TSI and rises up to €49,395 for the L&K 190hp 4X4 DSG. Seven seat Kodiaq will need to challenge similar sized rivals on price. Well equipped Korean siblings Kia Sorento and Hyundai Santa Fe both cost around €40,000.

With over 1,400 kilometres on the clock we set sail for Rosslare and despite a big swell and 3.5 metre waves, we landed home in good shape. After a quick spin around the port we reluctantly returned the car to Skoda as it had to go straight back to the factory in Prague.

Our Kodiaq road trip proved, if proof were needed, that Skoda is a brand to take seriously. Kodiaq is a very impressive family friendly SUV that should exceed the 1,000 Ireland sales expected in 2017, after all Noah liked it.

My daily routine living with . . . tell us about your health experience
6

Lip service: The rise and rise of cosmetic procedures in Ireland
Real news has value SUBSCRIBE