ESB and Nissan investigate cause of fault at fast-charging point 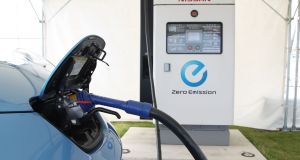 Nissan Leaf: when Chris Drumm plugged his car into the charging point, “there was a bang from the charger and a smell of burning and smoke came from it”

One Irish customer’s Nissan Leaf has had part of its on-board systems damaged by an apparently faulty fast-charging point, but Nissan and the ESB are still unsure as to the cause of the problem.

Chris Drumm posted on Facebook that when he plugged into the charging point in Newcastle West, “there was a bang from the charger, a smell of burning and smoke came from the charger”. The Leaf wouldn’t start after that and had to be taken away for diagnostic tests.

The issue has, at the time of writing, still not been isolated as specialist replacement parts for the car have to be brought in before it can be fully analysed.

The ESB issued a statement to The Irish Times saying “both Nissan and ESB are actively working together to ascertain the specific problem which occurred with the customer’s vehicle. Nissan is carrying out diagnostics on the vehicle and ESB is doing the same with the charger. Both parties are continuing to liaise on this issue and resolve it as soon as possible. We can confirm this is not a systemic issue”.

Mr Drumm, however, is still unsatisfied. He told The Irish Times: “We are making progress, albeit slowly. They estimate a couple of weeks at least to get to the root of the problem. I am told this is the first occurrence of this particular type of serious charging malfunction. I think they are unprepared and have not designed a protocol to deal with the poor sod stuck at the charge point.

The issue comes when the ESB is under fire from electric vehicle owners over the implementation of its new monthly subscription scheme for the use of public charging points.

Electric vehicle owner and advocate Alan O’Reilly was especially vocal in his criticisms.

“I believe it is down to the way the charging is being introduced, both the concept of paying just to have access and the high 30 cent per minute charge on fast-charge points. I also believe the way it has been communicated has increased frustration and anger.”

The extra price to use the charging points will also be of serious concern to electric vehicle owners if it is shown that they are damaging the vehicles through unreliability.