DeLorean say famous car could be back in the future

1,000 doors still exist from former Belfast factory and are in an American warehouse 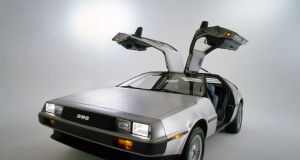 A small number of the “time machine” cars made famous by Back To The Future could be produced by next year, the DeLorean Motor Company has said.

The DeLorean’s silver gull wing door design was immortalised by the 1985 Hollywood film starring Michael J Fox a few years after the collapse of the original manufacturing firm in Northern Ireland.

It has emerged that around 1,000 doors still exist from the factory in Belfast and they are sitting in a warehouse in the US. Now a American government initiative allows new models to be made for the first time in 35 years.

“It is fantastic,” DeLorean chief executive Stephen Wynne told Texas radio station KPRC. “It is a game-changer for us.”

Even though the “flux capacitors” used to spirit the acting stars into the past are unlikely to be included, modern manufacturers said the vehicles enjoy an enduring appeal.

Around 2,800 parts make up a DeLorean and the Texas-based company, which has no connection with the original firm or the estate of John DeLorean, has over 99 per cent of them. It reproduces or rebuilds the rest using the original drawings.

The Back To The Future films have ensured the cars retain a cult following, after the hero Marty McFly used one to travel back in time.

He accidentally transported himself 30 years into the past, to 1955, when his parents were in high school. Marty’s interference with his parents’ love story intervened with the chances of his own birth, pushing him to do anything to get back “home” to 1985.

When Back To The Future hit cinemas in 1985, it raked in millions of pounds in ticket sales, became the highest-grossing film of the year and landed a sound effects editing Academy Award and three more nominations.

The first film was released three years after the closure of the original factory in Belfast. Fewer than 9,000 cars had rolled off the production line at the Dunmurry plant.

The unused stock, including millions of spare parts like nuts, bolts and washers, was sold and eventually bought by the new DeLorean Motor Company.

Irishman in London: 'I've faced a life-threatening situation before'
9