Not enough range on electric, not enough economy on diesel, and too pricey overall 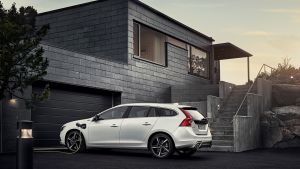 Sometimes, you join two things together and make them better. Fatuous business types, the ones who love their LinkedIn profiles more than their families, would call it synergy. I prefer to call it peanut butter and jam syndrome – two things which are fantastic singly, but better when joined together.

That should have been the case for the Volvo V60 D6 Twin Engine plugin hybrid. It actually takes three things that are individually nice – Volvo’s old-but-gold five-cylinder diesel engine, the V60 estate body and plugin hybrid technology – and joins them into one fuel- sipping, planet-saving whole. It should be the best of all worlds but, as so frequently happens when trying to cram too much good stuff together, the outcome is actually rather messy.

Let’s get the tech stuff covered first, shall we? The V60 Twin Engine is as complex and complicated as it sounds. It uses a 220hp 2.4-litre diesel engine to drive the front wheels, while under the truncated boot floor there’s an 11kWh water- cooled battery stack driving a 70hp electric motor which powers the rear wheels. Somewhere in the middle, there’s a fiercely intelligent electronic brain which juggles the available power (as much as 288hp) and battery charge and shunts it between the front and rear wheels as demanded.

The figures are, as they so often are for plugins, ludicrously impressive. Volvo claims 48g/km of CO2 and 159mpg on the combined fuel economy cycle, or 1.8 litres per 100km. Those numbers alone should be enough to have business user-choosers flocking to the car, keen to keep their BIK bills down, but they’ll have to vault the towering €59,995 price tag first.

Now, the upside of all that should be impressively low- cost motoring. After all, with a few hours of charging from a domestic power socket (four hours should be enough) you can do a theoretical 50km on just the batteries. This is, of course, the big selling point of plugin hybrids and, if you live in the right spot, you could potentially get through your entire week’s commuting and school-running without ever troubling the fuel tank.

It’s not, and never can be that simple, though. Firstly, you have to get into some rigorous discipline when it comes to charging. Remember how often you have to charge up your power-hungry smartphone? Yup, it’s like that. Keep plugging it in or you’ll never get the required electric-only range out of it.

Worse still, it’s rubbish at recouping that electric charge when you’re driving around. In some pure electric cars, such as Nissan’s Leaf, we’ve often taken urban journeys where, thanks to efficient brake energy recovery, you end up using hardly any of the battery range to do short journeys.

Not so the Volvo – in our hands, even on short hops, its range would plummet precipitously from an indicated 20km on a half-charged battery to nothing, kicking back from “Pure” mode into “Hybrid” mode with annoying frequency.

And when the five-pot diesel does cut in, it does so as gently as it can. If you’re standing still at the time, you’ll certainly notice the sudden noise and vibration, but if you’re already moving you may struggle to tell that it’s happened, until you ask for more power and hear the familiar growl and grumble.

There’s another problem, though, and that’s that the V60 can’t get diesel-like economy when you’re doing longer journeys. I suspect the frankly hilarious all-up weight of 2.5 tonnes is largely to blame here, but 39mpg overall seems like a poor return when you consider all the technology on offer.

At least in “Power” mode it feels properly quick, with a 0-100kmh time of 6.1 seconds, good enough to bother a Golf GTI.

There’s a final ignominy, though, and it’s in the boot. A standard V60 has a reasonably generous 430-litre boot. This one, with the raised-up boot floor to accommodate the batteries, has 305 litres. That’s a Volvo estate with significantly less boot volume than you get in a Ford Focus hatch.

So it’s a disaster, then? Well, not quite. Volvo tacitly admits that this is really an experimental model which you can buy and use, and knows that mixing diesel and electrics is the wrong road to follow.

The XC90 T8 Twin Engine, which uses a petrol engine and which has its batteries and electric motor properly integrated so that they don’t annihilate the boot room, shows where the tech is going and shows too that the tech can properly work.

The V60 Twin Engine is a bit of a dead end, but it’s an interesting dead end and one out of which which Volvo has pretty much already worked its way.

So your children now watch too much TV? Cut yourself some slack
5

Coronavirus: Is now the time to dream bigger about how we live our lives?
7

Children of the new Northern Ireland
8

Róisín Ingle: Hairwise, it’s only a matter of time before we go full Sinéad O’Connor
9