Your guide to the pick of 152-plate models 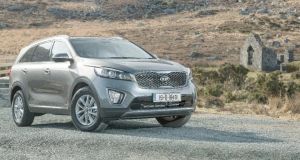 Considering just how old-fashioned and clunky the last-generation Sorento was, this new model represents one of the greatest leap-forwards in a single generation that we’ve seen. If we describe the Sorento as American, but in a good way that should give you some idea of what it’s like. Squashily comfortable with an easy-going sensation to the chassis, it feels big but never cumbersome and the cabin (which comes with seven seats) has top-notch quality. The sort of car that, once driven, you’d find very hard to live without. Best one: Sorento 2.2 CRDI 4WD EX for €38,995

The latest version of the CR-V is a classic case of allowing evolution to take place. When we first tried this generation of CR-V, we were left a bit underwhelmed but Honda has tinkered and tweaked constantly since then, and the latest model (using a 160hp version of the 1.6 diesel from the Civic, plus four wheel drive) is a cracker. The revised suspension gives it far sharper dynamics, the interior quality has taken a jump up and Co2 emissions and fuel consumption are both much reduced. Plus, being a Honda, it probably won’t break. Nice.

Is there any point in buying a Range Rover Evoque any more? The first expansion of the Discovery from single model to whole family has been very successful. It looks as classy as the baby Range Rover (which donates a chassis and engines) but costs a little less and is much more practical. Seven seat option is nice, but a bit expensive and it would be worth waiting till later in the year to get one with the new, lower-emissions ‘Ingenium’ 2.0-litre diesel. Watch the options list – it gets expensive very quickly.

As with the Mustang coming to this side of the Atlantic, and the Fiesta getting a SU green card, the Edge is part of Ford’s policy to produce one set of vehicles to be sold all around the world. It’s Ford’s first move back into a more expensive arena, and as such will be something of a litmus test for whether upscale mainstream can really compete with pukka premium brands. Imposing Yankee looks should help, but the dynamics and quality will have to be spot-on too. Launches: Winter 2015.

The Cherokee simply isn’t going to be everyone’s cup of tea. Jeep as a brand still has much work to do to convince Irish buyers that it’s worth a punt. The Cherokee’s oddball styling will put many off, and it’s quite pricey for a car from a brand that most people misuse as a generic term for all 4x4s. But give it a chance – the Cherokee proves pleasant to drive, is very refined and comfy, and hugely practical and pretty well bolted together too. A left-field choice, but it’ll certainly stand out amongst the hordes of me-too German and Koreand SUVs.