It’s an impressive beast, although the electric versions will prick our conscience rather less 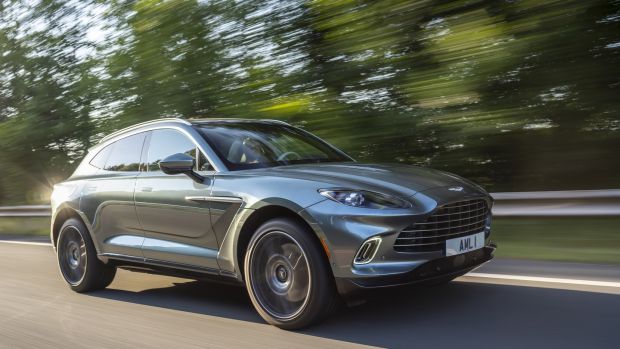 The Aston Martin DBX: arguably the best of the current high-end SUV crop.

To say that Aston Martin stands at a crossroads would be inaccurate. Inaccurate mostly because that would imply that the famed maker of sports cars and GTs hasn’t, metaphorically, stood at one before.

By jingo, it has – while rival Ferrari has carefully built and massaged both an image an empire over the past 70 years, for 107 years (and counting) Aston Martin has been like a financial hand grenade in a game of pass the parcel, with the pin most definitely removed.

In that century-plus change, Aston has had – depending upon quite how you count it – a dozen owners, being passed from landed gentry to tractor magnate (the DB in the car names comes from David Brown) to global car conglomerate and now in the hands of private investors.

Turmoil, and usually red ink in the accountants’ office, has been the way of Aston Martin since its inception. This is a company that made cars so beautiful and so desirable that – quite literally – small boys would send their pocket money by post to the company chairman when they saw headlines that spoke of bankruptcy and receivership. Equally, it’s a company that needed those small boys to send their cash.

Has that finally changed? Well, possibly. Almost two decades of Ford ownership in the 1990s and 2000s put Aston on an even keel for the first time ever, and its sale to a mixture of Kuwaiti and Italian investors had seemed like a good one, not least because it included a small 5 per cent stake taken by Mercedes, which in return would provide Aston with access to its technology.

Last year, though, following a somewhat disastrous stock-exchange listing, Aston plunged once again back into crisis mode, and it took a multimillion investment by clothing billionaire and F1 team owner Lawrence Stroll to stem that crisis.

Stroll, whatever you may make of his sometimes abrasive management style (and the fact that he keeps his less-than-talented son on driving duties at his F1 team) has blown through the corporate corridors of Aston Martin like a hurricane, and has talked Mercedes into taking an even bigger stake – now 20 per cent of the company – and has even brought in investment from none other than Toto Wolff, team manager of the all-conquering Mercedes-AMG F1 team.

Next year, Stroll will rename his own F1 squad from Racing Point to Aston Martin Racing (the team can actually trace its lineage back to Jordan and its 1992 F1 debut) and four-time world champion, and Ferrari refugee, Sebastian Vettel will be doing the driving.

Aston also has, potentially, the car that it has long truly needed – a big-selling cash cow in the shape of its first ever SUV. Called DBX, the car’s development was originally instigated by former boss Andy Palmer, who moved on once Stroll moved in, replaced by former Merc-AMG boss Tobias Moers.

While it uses some Mercedes mechanicals (the engine, gearbox and most of the electronics come from Stuttgart) Aston has shown a bit more moxie than most rivals when it comes to the rest of the car. Taking the likes of the Bentley Bentayga, Lamborghini Urus, and Porsche Cayenne as obvious and direct rivals, all three of them use the same chassis as their basis, and it’s the chassis from the Volkswagen Touareg.

Nothing especially wrong with that, of course, but the Aston DBX’s chassis is bespoke, a mixture of aluminium and carbon fibre directly related to that of the DB11 coupe and the Vantage sports car. That means that the DBX is surprisingly trim in weight terms for a large, luxury SUV – 2.2-tonnes, which ain’t light, but equally ain’t bad. It also looks very much sleeker and sexier than pretty much any rival. Trying to stretch and distend sports-car styling into an SUV is a fraught process – just ask Porsche and Lamborghini – but aside from an occasional hint of Ford Kuga in there, the DBX is really rather handsome.

Roomy, too – behind that rear end, which mimics the shape of the Vantage sports car’s tail, there’s a 632-litre boot, and a rear seat with limo-like leg-stretching space. Never been able to say that about an Aston Martin before.

Up front, the cabin is largely handsome, with crisp-looking digital dials, a big infotainment screen, and the only disappointments being slightly narrow front seats and the clunky, old-fashioned rotary infotainment controller nicked from an old E-Class. Oh, and the push-buttons to select drive or reverse in the nine-speed automatic gearbox are a little too far away. Ah well, 1-per-cent problems and all that...

The 4.0-litre turbo V8 engine – lifted from various Merc-AMG models –develops a robust 550hp and 700Nm of torque, but slurs to life in a subtle and subdued manner. That’s as long as you have GT mode selected, which closes the active flaps in the exhaust and quells some of the engine’s more exuberant tendencies. Flick over to sport mode and you get the full bark-and-howl performance. However, that refinement is arguably the DBX’s greatest asset.

While we all want our Aston Martins to have the sound and fury associated with the marque, most customers, on most days, actually want comfort and quietness and those the DBX provides in spades. The air suspension has a distinct underlying firmness to it, but it never allows road intrusions to upset you, while even though the engine raises its voice in a most entertaining manner, it never does so with anything other than smoothness, as if Hugh Grant were talking to you through a megaphone.

That alloy-and-carbon chassis and the 48-volt active anti-roll system really show their worth on a challenging road, though. For something this big and hefty, the DBX seems to have been filled with helium, so light and flickable does it feel through a series of corners.

It has truly remarkable deportment, and you can really feel the rearward bias of the four-wheel drive system when powering past an apex. In doing so, you’re also feeling the work of Aston’s chassis guru (actually chief engineer – vehicle dynamics) Matt Becker, formerly of Lotus. He’s closer to warlock than man, really.

The thing is, many car makers can offer you a big SUV with lots of power that can entertain on the right roads. The DBX represents little new, in that respect, but it does put a marker in the ground for the future of the brand. Thanks to that 20 per cent Mercedes stake, both hybrid and electric Astons are at last on the way, and soon – by 2025 at the latest. The DBX itself was originally touted as becoming the first electric Aston and that still looks likely to play out. Speaking to those inside the company, there’s genuine excitement about the Stroll era and the way it might play out, especially with the publicity from the F1 team.

However, it’s hard not to look back to Aston Martin’s past. Impressive and engaging though the DBX is, the small, lithe Vantage is the car that arguably still best represents what Aston is and what the brand does best.

For a start, it’s gorgeous – ignore those who say that the gaping, low-hanging maw of a radiator grille is less than elegant, because in the flesh it works brilliantly, as does the flick-up rear end with its slim, flowing brake-light bar.

Pull on the slim, light handle and the door opens dihedrally, angling upward ever so slightly, bespeaking of the exotic. So it’s a faint disappointment to slide into the cabin and find an ergonomic mess, with cheap-looking digital dials and a central stack into which buttons appear to have been fired from aged bazooka.

It’s okay, though. Ignore all that and thumb the glass-fronted starter button. The V8 turbo, the same V8 turbo that had so gently come to life in the DBX, now bellows its wakefulness in the Vantage.

It’s loud, harsh and mechanical, and erases any hopes you had of a discreet getaway. Press the D button and eight-speed auto thunks into gear (you can shift manually with gorgeous, long-bladed aluminium paddles, or spec a proper manual gearbox if you fancy). Now, on a quiet stretch of road, nail the throttle.

At first, the Vantage seems to accelerate quite slowly. That’s because, at first, you’re toasting the rear tyres and you’re actually struggling for traction. Traction found, the Vantage, with its 510hp and 685Nm of torque, leaps forward in a series of lunges interrupted only fractionally by the gearbox’s need to find another ratio.

This is a rear-wheel-drive car that can hit 100km/h from standing in 3.6 seconds. Yes, there are faster cars out there, but you’d have to be medically unhinged to try and exploit all their performance on the public road. The Vantage is more than sufficiently fast for any real-world situation.

It’s also noisy – not just the engine, but also the tyre roar, which makes this, unlike the DBX, not a long-haul comfort thing, but a proper, true sports car. It’s so raw it’s like being served a steak where you can still hear the echo of the moo, and if the steering isn’t quite perfect (although it’s not far off) and if the cabin looks like a mess, then you simply won’t care because you’ll be having too much fun.

It’s also, oddly, an expensive car which people don’t seem to mind you driving. You can see people mouthing ‘wow’ from the pavement as you drive by, whereas doing so in an equivalent Ferrari would likely have them mouthing another word beginning with W. People seem to appreciate an Aston in ways that other high-end cars struggle to match. Well, this Aston anyway. The DBX passes without many people giving it a second glance – it’s just another big, expensive SUV to them.

To us? Well, it’s damned impressive, although our consciences will doubtless prickle rather less when the electrified versions start to arrive. If it can achieve the kind of success seen by the Porsche Cayenne, then maybe the DBX can also do what Count Louis Zborowski, David Brown, Victor Gauntlett and Peter Livanos all failed to do – put Aston on a truly solid financial footing. Early figures in 2021 suggest that – just maybe – this is happening. Certainly, Aston’s revenue has increased and its losses narrowed.

If that continues, then its greatest achievement might be paying for future cars like the Vantage. Good though the DBX is, and hopeful though it makes us for the future of Aston Martin, the Vantage proves that, in this case, the past is where we’d rather be.