Top 100 cars for 2020: Sharp steering and iron-fisted body control mean that the Stelvio is genuinely entertaining 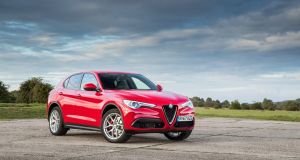 Alfa Romeo Stelvio: 2.2 diesel engine is not quite as smooth as those of its rivals, but the 280hp petrol turbo is rather lovely.

The Alfa Stelvio suffers from some of the same issues as the Giulia saloon, namely that it’s a little small on the inside, and has an interior that in many parts looks and feels half-a-decade behind those of its competition.

Ah, but that is to look only skin-deep. Dig a little deeper, and the Stelvio actually starts to impress. Specifically, you need to find a long, turning, twisting road - preferably the sort of Alpine pass after which the Stelvio is named.

Then the Alfa SUV starts to show its true colours; it’s a sports saloon with a loft conversion.

Sharp steering, excellent chassis responses, and iron-fisted body control mean that the Stelvio, almost alone amongst its peers, is not merely impressive on such a road, but actually, genuinely, entertaining. 2.2 diesel engine is not quite as smooth as those of its rivals, but the 280hp petrol turbo is rather lovely.

Not as lovely as the Ferrari-derived 510hp twin-turbo V6 engine in the Quadrifoglio version mind you; an engine that turns the Stelvio into a serious performance weapon.