21 Hyundai i10: Does well what few other really small cars manage

The previous i10 had been just a bit dull, but this upgrade excels expectations 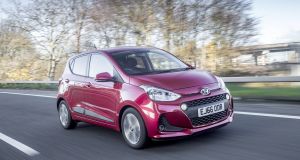 The i10 interior is robust, but also made of tasteful materials and has a sense of genuine quality

Hyundai’s second-generation i10 really ripped up the rule book when it came to micro-cars. The previous i10 had been upright, spacious and really just a bit dull so with this version, we were expecting more of the same. And it is pretty much the same, but . . . But there’s an intangible thing about the i10.

Much of it is to do with refinement and comfort, both of which are far better than you would expect of one so small. The i10 does well what few other really small cars manage – cruise up the motorway or main road in total harmony. In town it’s equally good; those tight dimensions make for easy parking and you’re rarely going to find a gap you can’t squeeze through.

Plus the interior is robust, but also made of tasteful materials and has a sense of genuine quality, rather than the cheapness you’d expect from a small car. The only black mark is the steering, which is so vague and rubbery that it makes it occasionally hard to know exactly which way the nose is pointing. Incoming facelift brings new styling at the front and a cabin upgrade.

Which one? 1.0 Deluxe – for the seventies name if for nothing else.