Memories of a mother’s drinking

Valerie Farragher’s alcoholism almost ruined the lives of her family. Now four years sober, she is trying to help other women avoid that terrible fate 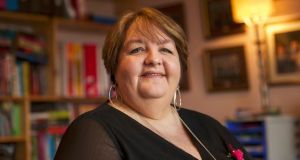 One thing at a time: Valerie Farragher at home in Co Mayo. Photograph: Keith Heneghan/Phocus

It is unlikely that Valerie Farragher’s new work, Come Back When You’re Sober, will be anyone’s book of the year in those Christmas round-ups (see pages 10-11). But, chaotic, contradictory and self-published as it is, it probably should be.

This is the story of a modern, rural Irish family devastated by the mother’s alcoholism, told not only from the mother’s point of view, but from those of her five children and, briefly, of her husband, Thomas. The reader is exposed to the agony of everyone involved.

Sarah Farragher, the middle child in the family, writes about “trying to cook and clean and do my homework all at the same time . . . I would start shouting at everyone to ‘f***ing help me!’ My Father would always complain about the house being ‘filthy’. It looked like a ‘Pig sty’, as my Father would say! He also told us to marry rich as we would need maids. I still have my fingers crossed on that one!”

Sarah developed a sixth sense about her mother’s drinking. “The moment that my feet would hit the ground coming off the [school] bus, I could always tell if she was drinking or not.”

The four girls describe running round the house searching for their mother’s empty vodka bottles: “Mum is short in stature so they were never in high places,” says Louise. She also writes about trying to look normal: “If lying to teachers was an exam, I would have gotten an A.”

The teenagers bought drink for their mother, which was “Way too much power to give to a Teen”, writes Elaine, the eldest in the family.

They describe searching the countryside for their mother when she ran away, and of watching their father as they did so: “You can’t help but be scared if you see the strongest male role model in your life terrified,” writes Elaine.

“When Mum would drink, it was like Dr Jekyll and Mr Hyde. She would have this look in her eyes as if to say, ‘F**k you, I’m going to make you pay,’ without ever opening her mouth,” says Sarah.

Elaine remembers Valerie before she started drinking. “There was a lovely mother before alcohol took over. She was the most dependable person,” she says.

Hard to believe
“Oh, it was bad,” says Valerie now. “And it was bad to read it, even though I’ve heard it all before. Sometimes I find it hard to believe all the stuff I did. And there was worse . . . I thought, Oh my God, they had to live it. I was drunk through it, and I was protected by the alcohol.”

The family thought long and hard before agreeing to write the book and appear in an RTÉ television documentary, Moment of Truth, which is due to air tomorrow.

“We all sat around the kitchen table and we were on the phone to Louise, who was in Australia at the time,” says Valerie, who has been sober for four years.

Her youngest child, TJ, who was 10 last month, and is protected, to a large extent, by his father and sisters, cannot remember her drinking. The family decided to tell their story because they feel that the cycle of drying out and rehab never worked for Valerie – or, by extension, for them.

Valerie suffered postnatal depression after the birth of her fourth child, Siobhán, in 1995, yet she was not treated for it. Valerie calls herself a “dual diagnosis”. She says many addicts also have mental health problems, and that the two are rarely treated together. After four stints in rehab she was eventually helped, as an outpatient at Ballinrobe mental health services, by having her depression treated with medication, and attending Aware, the support group for people with depression.

Valerie was identified, by addiction counsellors, as a food addict. She says her problems with food predated her problems with alcohol, having begun when she was depressed after Siobhán’s birth. “I was called a food addict first because I was fat. I’d had diabetes when I was pregnant with Siobhán.” At that point she had four children under the age of five.

Valerie Farragher is 23 stone. She has lost weight recently, but her priority is being free of alcohol. “One thing at a time,” she says. “It’s an ongoing thing. I’m not going to know everything immediately.” She walks with a cane due to a knee injury she incurred when she drunkenly went on – or, rather, off – the children’s trampoline.

The surprising thing about Valerie’s story is how very recent it is. She grew up in a loving family, the child of a Mayo father and an English mother. They moved back and forth between England and Ireland.

She was educated mostly in Ballinrobe, and the story of her schooling is a tale of a young girl given little encouragement, no confidence and no qualifications. Thomas proposed to her in the queue for the chipper and very soon they were expecting their first child, and were teenage parents. Her own family were in England.

It was years before she returned to studying, to try to complete her education with the help of the Learning Curve Institute in Castlebar. It was only then that she realised “the world I lived in, although a nice cosy place, was closed, segregated and influenced by money, power and how educated you were”.

Valerie Farragher is 44. She grew up in 1980s Ireland and places the start of her drinking in the context of recent history, when Thomas, always a good provider, got an excellent job.

“Siobhán was born in 1995, at the beginning of the boom. They got this massive contract up at the Red Cow [in Dublin] doing the air conditioning and the plumbing. He was the foreman; it was a huge responsibility.

“His career was taking off when my career was f***ed to s**t. I had been working at the community playschool in Ballinrobe. I had left because I had nothing left to offer those children. I knew there was a drink problem coming. I left before I was kicked out. You know how we protect ourselves.”

The disaster rolled on, unabated. Perhaps there is truth in Sarah’s adult observation, that “To this day I feel like she is trying to get out of the mother role.”

And also to Sarah’s admission “I am really asking too much of her. What I want is only real in movies . . . really all I want is a mother who cooks, cleans and is ‘normal.’ ”

Addicted to drugs
Valerie has started to help women who are drinking or addicted to drugs in their own homes. In many cases these women are the lynchpins of their families, either as mothers of young children, or as carers for disabled relatives. “Someone’s got to help these people where they are,” says Valerie, rather than placing them in a “rehab setting”.

She says many women simply cannot be spared by their families for residential treatment. She also feels that, although she is abstaining from alcohol herself, the AA model of total abstinence is too strict for a lot of people at first.

Valerie is running a private programme whereby women can detox at home, for a fee of €800. One day she wants this programme to be part of the community mental health services in Co Mayo, which she says are very good.

In the meantime she is talking and visiting women in rural Ireland. In some cases, women care for severely disabled relatives all day and start drinking at night. “They are doing their best,” says Valerie. She wants to help them manage their drinking, and the harm it does, even if they cannot stop.

To contact New Choices (“for mothers who are having difficulties with alcohol and depression”) email: valfarragher@ymail.com. Come Back When You’re Sober by Valerie Farragher is available from Dubray and other independent bookshops, or from bookhub4u.ie