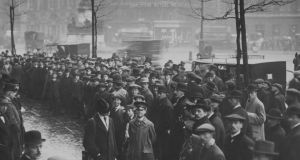 Monday is the centenary of the beginning of the Dublin Lockout, when employers in the city sought to destroy the Irish Transport and General Workers’ Union.

From William Martin Murphy and the Dublin United Tramway Company to Michael O’Leary and Ryanair, the fundamental questions remain the same. Should workers have a right to collective bargaining, to union recognition, to seek a larger share of the profits they help create and a voice in the workplace, or are these luxuries a competitive society can ill afford?

When these arguments were played out a century ago the conservative consensus of property, patriarchy, the Catholic Church and the Home Rule political establishment-in- waiting prevailed. This sealed the socioeconomic consensus in 20th-century Ireland.

The first World War was the saving of the Irish trade-union movement. Thousands of working-class reservists were sucked out of the labour market, and the British government introduced an arbitration system to maintain industrial peace on the home front.

It was criticised by workers because wages never caught up with prices. Nevertheless, it facilitated union recognition in Britain and Ireland. Later the close identification of the labour movement with the struggle for independence enhanced its status in the new Irish state.

Irish workers also benefited indirectly from the renewed boost to organisation, pay and conditions their British counterparts got in the second World War and its aftermath. The long postwar boom in Europe also ultimately benefited Ireland.

The Programme for National Recovery in 1987 created structures that gave Irish workers greater improvements in living standards, although from 2002 the system become increasingly unfit for purpose.

Social partnership is discredited, but its real flaw was a lack of ambition. Above all the partners failed to agree long-term goals for the type of society they wanted, or to subscribe to common values. Partnership was sold as a process rather than a road map because there was no agreed destination. Unions, buoyed by rising numbers in organised sectors and superficial access to the corridors of power, became complacent.

If social partnership was good for workers, it was bad for unions. Their success in strengthening workers’ individual rights reduced the need for workplace organisation. Industrial relations were colonised by lawyers, and individual workers paid a high price for legal representation instead of union representation.

Unions have been to the forefront of the struggle not just for better working conditions but in issues such as female suffrage, slum clearance, universal healthcare and free education. Societies with strong unions have higher levels of equality and political activism.

Today, employers say employees prefer to deal with them directly, but independent studies show that more than 70 per cent of workers want union representation. Demand is highest among low-paid, young and unorganised workers. Paradoxically, many unionised workers take preferential treatment for granted.

Unions need drastic restructuring, but they need help achieving it. Above all they need the State to facilitate union recognition, because they are not strong enough on their own.