Living to 100: who wants to be a centenarian?

We’d like to bring you a list of top tips for long life, but they’re a bit hard to pin down 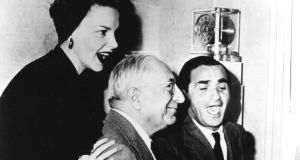 Dubbed the next Garbo, the German stage darling Luise Rainer sailed west in 1935, taking her beloved Scottie dog with her. At the ninth Academy Awards, in 1937, she was named best actress for a role in which she was wonderfully emotional on the telephone; then she won again, a year later, for playing a Chinese slave wife who barely speaks. But the first actor to win consecutive Oscars never liked stardom much and soon retired.

In the summer of 1929 Irving Kahn, a New Yorker, borrowed money from an in-law to short-sell shares in a copper company, meaning he would profit from a fall, not a climb, in the price. Only fools bet against a bull market, he was told. Wall Street crashed that autumn, and Kahn almost doubled his money. He was not a fool.

Clare Hollingworth was in Poland in August 1939 reporting for the Daily Telegraph when she borrowed the car of a British diplomat and crossed the border into Nazi Germany. As she drove along, a gust of wind blew a roadside hessian screen off its moorings and revealed a valley of tanks, ready to invade. It was time to contact the Foreign Office.

Rainer, Kahn and Hollingworth have at least one thing in common: they are all living centenarians.

Rainer, who is now 104, and living in London, was snapped this summer drinking her morning cappuccino, smiling down her daughter’s lens and swirling the cocoa into the froth.

Kahn, who is 108, was, as of August, still taking a cab three times a week to the Manhattan offices of his investment firm.

And in Hong Kong, where Hollingworth, who is 103, resides, the Foreign Correspondents’ Club throws birthday parties each year for the woman who got a scoop on the outbreak of the second World War.

In 2014 centenarians are already special by virtue of their age. The fascinating things that people like Rainer, Kahn and Hollingworth have done are a bonus. They could have been biting their nails for 100 years and they would still have lived extraordinary lives based on longevity alone.

It works the other way around, too. The scientist who discovered LSD, the composer who dreamed up White Christmas and the pyschologist who was part of the inspiration for Wonder Woman – Albert Hofmann, Irving Berlin and Elizabeth Holloway Marston – would all have been said to have had notable innings even if they hadn’t also reached triple figures.

To be the “oldest person” in a particular place is not a safe occupation. The holders of those titles always seem to be dying. Only last weekend Ireland’s oldest man, 108-year-old Luke Dolan, passed away in a Roscommon nursing home, having attributed his longevity to a daily boiled egg, plenty of sugar in his tea and a devoted wife.

The centenarian lifestyle is frequently mentioned in dispatches like this, which is understandable, although anyone who tries to translate such biographical details into a manual for postponing their own death will fast become confused.

Some maintain that it is not lucky to add centenarian to your list of achievements; that it is too lonely, too long a withering. Yes, indeed.

To that I say, isn’t the year just flying in? It’s not that I ever expect to see 2079. The idea of doing “the 80s” again is laughable. Yet it somehow feels unambitious not to suffer from centenarian envy.

Today’s babies are said to have a better chance of reaching 100 than their parents, which is something to bear in mind the next time you see a toddler lick an iPad. That their knees won’t make it the full century is immaterial. Their friends may well do.

The most touching detail in the reports of Dolan’s death was that the man who has inherited his title, Michael Lambert, who is 107, visited him this year “to chat about the old days”.

I like the idea that, in the future, centenarians will shuffle around to each other’s parties, bitch about other generations and try to remember who did what to whom in 2046, all while plying guests with sugary tea and LSD.

Shane Hegarty is away