Keep or scrap the Border?

Let’s have a few decades of civility before we decide 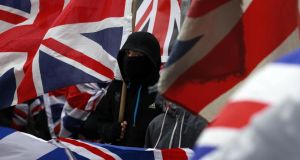 “This place, I tell you”: a protester during the flags dispute. Photograph: Cathal McNaughton/Reuters

Back in the 1990s, between the ceasefires and the Belfast Agreement, I commented to an Italian journalist who was in Belfast to write an article on our then nascent peace process that I thought there was no prospect of reunification in the next 50 years.

A couple of weeks later the same journalist was passing through Belfast again. She had been talking in the meantime to a mutual friend, himself from Belfast, with very definite republican views. To my assertion that the Border would remain for another couple of generations our friend had remarked to the journalist that “even a smart person can say a stupid thing”.

I was happy to bank one half of his remark. (Hoard your compliments, I say: you never know when you will need to raid them for comfort.) As for the second half, well, my initial Border comment had been no more than a hunch. I was prepared to concede that my hunch might be wrong, our friend’s right.

Time, or a bit of it, has passed, and I haven’t seen the Italian journalist again, but if she were to ask me today I would tell her without hesitation that getting rid of the Border any time soon would be the stupidest idea since the last really stupid idea, which was creating the Border in the first place.

I say this as someone with strong family ties to Cork, Dublin and Waterford. I say it as someone who believes that the Border will eventually go (a point I had made to the Italian journalist back then), in the same way I believe that the United States will eventually fragment, that there will eventually be another pan-European war (followed by another attempt at integration, followed by another war) and that the islands in our archipelago will one day come together in political confederation and quite possibly (we will be fossils by then) geological union.

Nothing is permanent; nothing represents a natural state or order. What is won’t be; what was may be again.

Earlier this year Sinn Féin launched a campaign for a new Border poll – launched it, if memory serves, in a week at the height of the flags dispute – the flags dispute! This place, I tell you – when it had urged unionist politicians not to enflame a dangerous situation with intemperate rhetoric.

That much of the unionist rhetoric was intemperate and inflammatory does not take away from the fact that this was a classic example of a party speaking out of both sides of the mouth at the same time.

Anything more calculated to undermine broad unionist confidence in our by now old-enough-to-know-better process is hard to imagine. It’s no good telling people they have nothing to fear if you keep on trying to spook them.

Sinn Féin has not even begun to persuade unionists of the virtues of a reunited Ireland. Instead its campaign seems much more designed to attract electoral support in the South in the run-up to the centenary of the Easter Rising – a case of asking voters to make a decision about the future when they have one eye on the past.

(By the way, the Easter Rising? On a scale of smart to stupid? Let’s just say I wouldn’t go looking for at it at the end with the special theory of relativity on it. The only thing that redeemed it was that the British response, not for the first or last time, was off the stupid end of the scale altogether.)

I recently saw some illustrations, by the artist and researcher Nikolay Lamm, of how human beings might look 100,000 years from now, their eyes and foreheads vastly bigger than our own: all the better to see and reason with.

Live beside the Edge in docklands penthouse for €1.7m
10