Is it time Dublin had its own Chinatown?

Google Maps says the city already has one, around Parnell Street East. Local traders back the idea of making it an official district of the capital 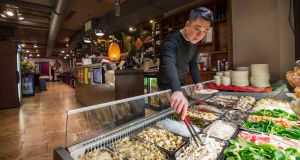 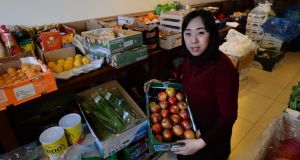 Chinese flavour: Wei Zhong at Qing’s vegetable shop, one of the many Asian stores around Parnell Street East in Dublin. Photograph: Brenda Fitzsimons 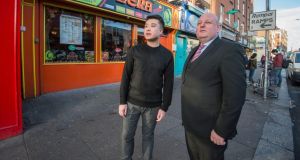 London, New York, Sydney and many other western cities have Asian districts, the entrance to each marked by a paifang, or traditional Chinese arch. Is it time for Dublin to have an official Chinatown too?

It’s a question that will be up for debate as the city throws its 10th Chinese New Year Festival, to mark the start this weekend of the year of the rooster.

“We’re not campaigning for a Chinatown,” says Aimee van Wylick of the festival. “We are just opening up the conversation, as the Parnell Street East area is already designated as Chinatown on Google Maps. The idea of a Chinatown in Dublin has been around for years, but this is a first step to make official decisions about it.”

In the 1980s and 1990s the South Great George’s Street area became the first part of Dublin to have a strong Chinese presence, with restaurants and the Asian supermarket on Drury Street. In the intervening years the Chinese presence has shifted north, with more restaurants and shops on Capel Street and even more on Parnell Street East. In its Asian supermarkets huge bags of jasmine rice jostle for space with lychees, preserved duck eggs and stacks of Chinese newspapers.

One passerby, Qi Wang, thinks it would be good to designate either the Capel Street area or Parnell Street East as Dublin’s official Chinatown. “Chinese people already come here. And having it as Chinatown would attract tourists and Irish people as well,” says Wang, who teaches mathematics at Dublin Institute of Technology.

Lao, a restaurant on Parnell Street East, already has regular tour buses of people coming to dine. “Loads of Chinese on holidays come here, because they are looking for real Chinese food,” says its owner, Yuyang Xin. “If the area was called Chinatown more European and American tourists would come here too.”

But one African-Irish trader thinks officially designating the area as Chinatown would be bad for other businesses. “This street used to be full of African shops before the Chinese came here. If it was called Chinatown people wouldn’t come here to buy hair extensions,” says Punk Ojukwu, who sells hair products. “They should leave it as Parnell Street and give us compensation for the roadworks over the past two years.”

In 2015 the businesswoman Anne Marie Murray, who owns the Gate Hotel and Fibber Magees on Parnell Street East, proposed putting up a Chinatown arch at the O’Connell Street end. “I suggested we meet with Dublin City Council to see what is allowed in planning terms and find out about other upgrading to the street,” she says. Murray set up a Facebook page – Chinatown Dublin – and an online petition, which has received more than 1,200 signatures.

“I think the north inner city has been very neglected by Dublin City Council and the Government,” she says. “The Chinese have brought a good sense of community to it. I and some of the other traders would be prepared to invest in Chinatown, although I am aware that some people might object because of the historical associations with Charles Stewart Parnell.”

Lorcan O’Connor of the Carrolls Irish Gifts chain owns several properties on Parnell Street. “During the Celtic Tiger nothing happened on Parnell Street East, but then we put in new shopfronts, to make it feel a bit safer,” he says. “We have looked at calling it the Oriental Restaurant Quarter, because Chinatown seems a bit narrow. Yet most people accept there are other ethnic groups in there too.”

O’Connor is one of the people who’ll be taking part in a debate next Thursday, as part of the Chinese New Year Festival, about whether Dublin should have an offical Chinatown.

Graham Hickey of Dublin Civic Trust lives nearby and walks through the area every day. “The multicultural traders on the street – and there are Korean, Vietnamese and Chinese – add a vibrancy to the street,” he says. “But we’d like to see a vision to lift the quality of the building stock. I’m not sure if it needs to be tagged as Chinatown. Why can’t it be a fusion of uses and cultures within the traditional Dublin building stock?”

The cross-city Luas will pass along the street, and Hickey hopes that new paving and trees will lift the streetscape substantially. “The Luas will definitely bring more footfall to an already highly used area, and Dublin 1 deserves the level of investment that Grafton Street has seen,” he says.

Kieran Rose, a senior planner at Dublin City Council, who will also take part in the panel debate, says, “These things develop organically. Our aim is integration, and we’ll listen to all views.”

The Year of the Rooster will be celebrated during Dublin’s 10th Chinese New Year Festival, which runs until February 12th. Events range from cookery classes and tastings to table tennis, comedy, chess and calligraphy. Here are a few highlights.

The American-Chinese food writer Mei Chin will lead a cookery masterclass at Cooks Academy, 19 South William Street, Dublin 2, on Sunday, from 10am to 4pm.

The Buskers on the Ball sports bar, on Fleet Street, Dublin 2, will host table tennis and Chinese nibbles on Wednesday, February 1st, from 6.30pm.

The panel discussion about what value an officially designated Chinatown could bring Dublin is at Belvedere House on Thursday, February 2nd, also at 6.30pm.

And Lao’s restaurant, on Parnell Street East, will host a karaoke and Chinese-bites night on Sunday, February 5th, from 5pm.