I love you. Let’s vandalise the Ha’penny Bridge

‘Lovelocks’ are a scourge of many cities, including Dublin and Belfast. What’s the answer? Maybe it’s more lovelocks 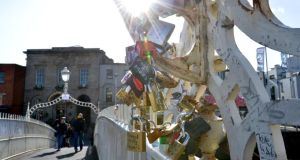 Who were the first to do it? Tourists, perhaps. Or maybe a local couple who had returned with the idea from a visit to Paris or Rome. It doesn’t matter. It must have seemed cute to them, this novel public display of affection. Put their names on a padlock. Stick it on the Ha’penny Bridge. Throw away the key.

Then what? Admire their handiwork for a time. Get a snap. Stroll off romantically, or drunkenly, or both. Then return every now and again to find that their padlock not only is still there but also has found company.

A couple of other locks at first. Hardly noticeable to the passersby. Then a few more. And more still. Until it becomes obvious. A variety of locks. Big, small, fat, thin, some blobs of primary colour among sprouting brass and steel. An infestation spreading along the bridge, over it. Locks hanging, clinging, fighting for space, until the pedestrian has to flinch to avoid them.

Soon the elegance of Dublin’s most famous bridge will have been spoiled by the sight of them, a Georgian beauty held down and given multiple piercings.

And one thinks: are the couple who put the first lock there still together? Perhaps they’re with other people now, writing their names on fresh locks, finding a new space on the Ha’penny Bridge, throwing away those keys. Because although these things are called “lovelocks”, it is hard not to imagine that the trend has proved stronger than many of the relationships, that the metal pestilence along the bridge is a memorial not just to love but also to a lot of people who probably can’t stand each other by this stage.

That might be the cynicism talking, but it’s hard to silence it. Although those couples who add their padlocks to the bridge do so with an undoubted sincerity, and sense that this represents something important about their feelings, to so many others passing over it’s a horrible trend that has proven resistant to common sense. It’s like a couple kissing on a packed train. It’s nice for them, but no one else wants to see it.

On Monday a group of French tourists passed under the overhanging locks, one wondering what it was all about and another explaining with disdain that it is the same thing that had happened to Pont des Arts in Paris.

That bridge has become a kind of ground zero for the lovelock trend, and it was from that direction that the trend seems to have washed up the Liffey (and the Lagan, too, where the simplicity of Belfast’s Lagan Weir Bridge has also been spoiled by lovelocks).

It is not just Pont des Arts that groans under padlocks but other Parisian bridges, too, such as the small and now suffocated Pont de l’Archevêché. In recent years the trend has become global, and each month brings some new city on the map where love is declared through the medium of unconscious vandalism.

Some cities tolerate it. Some fight it. A new campaign in Paris pleads for people to stop pretending that lovelocks are a “tradition” and to instead understand the damage they’re doing to the structures themselves.

Elsewhere there is even Toool (the Open Organisation of Lockpickers), which encourages volunteers to do the decent thing and remove the locks, but keep them somewhere safe – but only because they hate the sight of a destroyed lock.

In Dublin, the signs asking people not to padlock their love to the Ha’penny Bridge are ignored. Dublin City Council removed 300kg of locks from it last year, only for them to sprout anew. So maybe Dublin – and Belfast, and wherever next on the island is next to be infected – needs to think differently.

So why fight it? If people are going to do it, maybe the answer is not only to indulge them but to make a virtue of it.

In Moscow they have built “love trees”, sculptures on to which couples can lock whatever they want. The trees bisect the city’s Luzhkov Bridge, with the locks hanging from the branches an evergreen flourishing of couples’ declarations of love, or lust, or passing infatuation, or whatever – because it doesn’t matter.

It’s a neat way to deal with an ugly problem, and Dublin could learn from it. Because there are only so many boltcutters in the city.

And because the Ha’penny Bridge really needs to be shown some love.