The demand for cutting back branches or chopping down trees is growing in rural areas and cities, but that doesn’t stop tree surgeons from being professional ‘tree-huggers’ 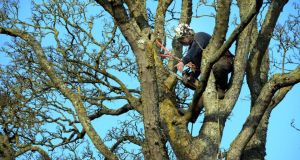 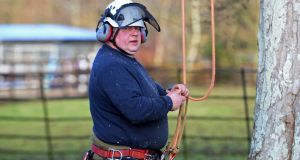 Tree surgeon Stephen Buchanan: “People often put in too many trees which grow large relatively quickly. If a garden is sufficiently small, you are better with large shrubs and fruit trees.” Photograph: Eric Luke / The Irish Times

Stephen Buchanan was about five years old when he first saw a tree being felled. It was in the family’s garden in Castleknock when Dutch elm struck in the 1970s when he witnessed the devastating effect of the disease.

“It made quite an impression,” he says, explaining that his horticultural interest was inherited from his mother’s family, the Shackletons. The second time the disease struck, he took down an elm while his father was away, having carefully watched a few trees being pruned and felled.

Having stripped the tree to a pole, a neighbour’s son who was afraid of heights climbed a nearby western red cedar – “he climbed in the dark so he couldn’t see – and threw a rope with a weight into a high fork in the elm which we were then able to pull. That was the first tree I cut.”

Today he can’t remember how many trees on which he has operated. He has pruned trees for the Office of Public Works (OPW) in the Phoenix Park, Farmleigh, Dublin Castle and innumerable private gardens around Dublin and beyond.

“When I started there were only a handful of surgeons – five or six – and now they are too numerous to mention. It was not thought of as a job until recent years and due to health and safety standards, people started training and learning, many of them doing site clearances for estates. I don’t like onsite work and prefer domestic gardens.”

His own training began after a year in Gurteen Agricultural College and a period spent working as an agricultural labourer, “driving tractors etc”, and then caretaking properties belonging to Lord Iveagh around Dublin. A friend who had nursery trees alerted him to a course in tree surgery in Merrist Wood College in Surrey and he moved to the UK becoming one of about 100 on the course.

Almost immediately on returning to Ireland in 1993, he found work with another tree surgeon before setting up his own business called All Season Tree Care two years later, with work mainly coming through people he knew.

“My work is everything from pruning small trees to final removal and occasionally planting,” he says. Insurance was an issue initially until Quinn opened the market, “though it is higher in Ireland than the UK because of litigation,” Buchanan says.

His surgical equipment consists of pole saws, spearheads, wood clippers and chainsaws, along with trucks and machinery for gouging out stumps.

In a recent Dublin back garden, for example, he pruned a 20-year-old birch, thinned out a magnolia grandiflora, removed an overgrown bay and most of a Rambling Rector rose that was beginning to choke a mountain ash, a job that took most of the day. He says there are few preservation orders on trees in Ireland. “There are two forms of preservation: for outstanding specimens – and those are scarce – and the protection given during planning permission. We don’t have the same fondness for trees as elsewhere in Europe.”

“Many people see them here as a nuisance, blocking light. We still have a long way to go planting trees. Down in Mayo I have seen habitat destruction of hazel growing out of limestone rock and parts of Galway where limestone is being quarried for road fill. It is such a pity.”

But he also advises against planting trees in small domestic gardens. “People make the mistake of putting in too many trees which grow into large trees relatively quickly. If a garden is sufficiently small, you are better with large shrubs and fruit trees.” Cherry trees, for instance, have invasive roots and can split walls and pavements while London Plane, a familiar feature on Dublin streets are very tolerant of air pollution.

“The leaves get blocked with pollution and the tree will shed its outer bark and photosynthesise through young green bark,” Buchanan says. He says that oaks can live for up to 900 years. “Three hundred years to grow, 300 years to live and 300 years to die – in ideal conditions.”

With a tree surgeon’s eye, he notices the oddities around Dublin such as the Turkish hazel off Highfield Road, the Eastern Planes in Drumcondra and two flourishing ginkgo trees in the Incorporated Law Society that he planted after removing two birches that were not thriving. He particularly remembers collecting a 25-foot sweet gum or Liquidambar tree and transporting it from Donnybrook to Kenilworth Square on a trailer.

Now based in the Naul in north Dublin, what he loves about the work are its physical aspects and being out in the open, with each garden being a challenge.

“I have a particular fondness for walnuts, oak, pine and cedar. I love the tactile feel of the walnut and the smell of the leaves. I would have very little time for leylandii and Larson cypress. Unfortunately there are times when you have to take down healthy trees sometimes because they are badly placed – I took a lovely cedar down recently because people were complaining that it was pulling on phone wires.”

Michael Harding: The woman at the checkout said my mask made me look constipated
7