Space, the final frontier for architecture 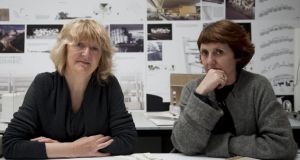 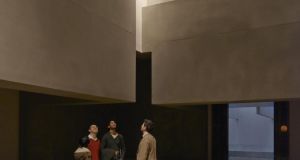 The installation at ‘Sensing Spaces’ by Grafton Architects 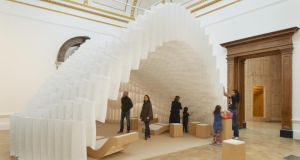 The installation by Diébédo Francis Kéré 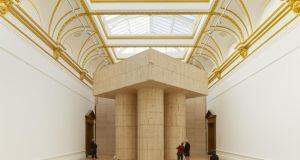 The installation by Pezo von Ellrichshausen 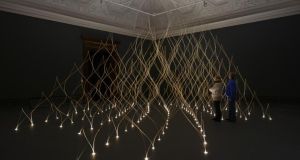 The installation by Kengo Kuma

How do you feel? Does the space you are in have an impact on that? “It’s such an enormous question,” says Yvonne Farrell of Grafton Architects, sitting beneath a large rooflight in a small room whose walls are papered with drawings, interrupted by shelves carrying architectural models.

It is here, high above Weir’s jewellers on Grafton Street, that she and Shelley McNamara create the architectural gems which have spread their reputation beyond Irish borders, across England and France and as far as Lima, in Peru, where they have a school of engineering on site (the clients are so keen that they started building before all of the drawings were finished).

Farrell has just flown back from London where she has been installing a new work – along with six other architectural practices from varying cultures, career stages and luminosities of starchitecturedom (including two Pritzker prize winners) – at the self-explanatory Sensing Spaces exhibition at the Royal Academy in London’s Piccadilly.

There she and McNamara have physically answered the question of how buildings make us feel, within the classical confines of two rooflit rooms – one large and bright; the other small and “earthy”.

The pair – in practice together for 36 years – are used to working at all sorts of scales (from houses to universities), but the RA exhibition, curated by Kate Goodwin, steered them into the elemental.

“It was very challenging to make something that communicated an aspect of architecture, that wasn’t about architects’ work,” says Farrell.

The pair saw the light: and captured it, guided by how others had done that. Farrell says: “The things we really loved, like light coming into the Pantheon . . .”

“. . . and the Soane Museum,” says McNamara, “are most related to light. What kept coming was how light and structure worked together.”

Feat of engineering
The resulting installation was guided by the concepts of weight and mass, and light and lightness, and involves hulking reflective panels dangling from rooflights; a film of London’s winter light passing around the walls; and benches.

The dangling part of the installation – heavy seeming but deceptively light (made to a secret recipe) – took a feat of engineering to get into the listed Academy building (whose north block is by architect William Chambers, who designed the Casino at Marino, the Hugh Lane Gallery building and two buildings at Trinity College in Dublin) and both Farrell and McNamara have high praise for AKT structural engineers and installation makers MDM Workshop: “They are terrific.”

While the pair list their achievements – the universities they’ve built, the lecturing at Harvard, Yale and Lausanne among others, the wonderful record of competition wins – and talk of their design methods, they keep steering the conversation out to the potential and achievements of others.

They’ve also endured hard times, having had to take their seats on the never-ending property-market rollercoaster that anyone choosing to run an architectural practice is required to ride.

“We’ve been through three recessions now,” says McNamara, “but the recent one was the scariest.” They talk of how projects suddenly went “on hold”, and the office went part-time. They moved back into Grafton Street, having worked in a larger office nearby.

But the 17-strong practice may soon outgrow this space – accessed by an industrial lift with clanking, metal gates – because they have just won two major competitions. They got on shortlists to enter four last summer – “we applied for a lot more” – and spent what they say was the hardest, most intense period of work they can remember. Result: an institute south of Paris and a new building for Kingston University in south London.

“It’s hard to beat Richard Rogers, ” says McNamara, referring to the winners of the competition they entered for the London School of Economics.

‘Silent language’
And that is how they say they’ve ridden the recession: “Doing competitions.” But how do you win them? “We have a fantastic team. We put ideas onto the walls,” says McNamara, seated amid ideas’ wallpaper. When I arrived she was sitting at a huge table, with a drawing, discussing it with younger colleagues.

“They bring ideas to the table and we sift through them and try and find the core idea of a project and then run with it.”

They talk of being interpreters and translators of clients’ wishes. “Architecture is a silent language that speaks: it doesn’t represent, it is,” says Farrell.

It takes someone to believe in you, she says, and the client was right: the building won the first World Building of the Year award (their University of Limerick work was on the Stirling Prize shortlist this year).

Farrell widens the discussion again, saying that others need to be given such chances. Irish architects are really well trained, she says, and Grafton has shown that a small practice (12 strong at the time they won) “on an island in the Atlantic” can do it: “You don’t have to be 300 people in California. ”

“Younger architects need opportunities,” emphasises McNamara. “It is difficult to get those opportunities to thrive in Ireland: we will lose them and culturally that is very impoverishing.”

They too would like to do more here. “It is very important to be working in your own place,” says McNamara. “Working abroad has given us fantastic opportunities, we are not complaining, but we would hate to think we wouldn’t be building in Ireland.”

Architectural practices, no matter what size they are, can work at all scales, they point out. They love the mix of houses and universities; the lecturing -“you so learn so much about yourself”; and creating exhibitions - from which “you learn so much”.

And learning and sense of self and space is what they hope to instil at the Royal Academy: a sensation of heavy mass overhead, the interplay of light and structure, and contemplation, via benches.

Heightening awareness
“To encourage people to sit and not rush through; to stop and experience the effect of light on surfaces,” says Farrell.”We have got rid of layers in architecture,” down to “a seat and a shadow. It doesn’t have to be an incredible cathedral . . . you can have architectural experience against a wall and it’s the quality of light that makes that lovely.”

But Farrell thinks the less people know before going to the exhibition, the more they can experience it personally. “I would worry people might think it’s like going to Disneyland. It is the opposite. We are asking people to go and just try and heighten their own awareness.

“There are very beautiful things around us. They can be quite modest: architecture doesn’t have to be bells and whistles. A stone-slab and good light . . . taking one element and heightening it.”

Thinking outside the box: who’s who at ‘Sensing Spaces’
Instead of the standard architectural exhibition comprising models, plans and photographs of buildings, Sensing Spaces looks at how touch, vision, sound and memory play a role in perceptions of space, proportion, materials and light.

“When putting together this group of architects I purposefully sought out those who would bring a variety of perspectives on how we think about architecture and the spaces around us. I sought those from different cultures, generations and geographies,” says curator Kate Goodwin.

Álvaro Siza was born in 1933 in Matosinho, Portugal. He has worked abroad as well as in Portugal where his best-known buildings are the Boa Nova Teahouse (1963), the SAAL Bouça Housing estate (1977) and the Church of Macro de Canaveses (1996). He won the Pritzker Architecture Prize in 1992.

Eduardo Souto de Moura was born in 1952 in Porto, Portugal, and worked for Álvaro Siza as a student. When he graduated he established his own practice (and works in the same building as Siza, in Porto). His buildings include
Paula Rêgo Museum, Cascais, Portugal (2009) and the Braga Stadium, Portugal (2004). He won the Pritzker Architecture Prize in 2011.

Diébédo Francis Kéré was born in 1965, in Gando, Burkina Faso. He studied in Germany where he set up his practice, Kéré Architecture, in Berlin in 2005. He has designed schools and community buildings in Burkina Faso and across Western Africa. He won the Aga Khan Award for Architecture in 2004 for a primary school in Gando (1999).

Kengo Kuma was born in 1954 in Kanagawa, Japan, and now runs a large, global practice. Recent buildings include the Asakusa Tourist Information Centre (2012), the interior of the Sake No Hana restaurant in St James’s, London (2007). His building for V&A Dundee is on site.

Li Xiaodong, who was born in 1963 in China, is professor of history and theory at the Tsinghua University School of Architecture and also runs a small practice. Buildings include the Bridge School, Xiashi, China (2009), which won an Aga Khan Award for Architecture in 2010, and the Liyuan Library, China (2011).

Pezo von Ellrichshausen was founded in 2002 by Mauricio Pezo (born in 1973) and Sofia von Ellrichshausen (born 1976) in Concepción, Chile. They work across art and architecture and projects include installations and houses in Chile, the US, Portugal and Spain. Their best known works are the Poli house in Coliumo, Chile (2005) and their home and studio the Cien house in Concepción, Chile (2011).