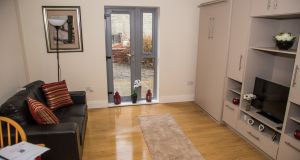 Inside Hogan Court: While they are small, the apartments have character and flair, and have been tastefully decorated.

While the Government continues to push its Help To Buy scheme, which aims to alleviate the housing crisis by encouraging new builds, some charities are taking a different approach. The Peter McVerry Trust, along with other housing charities, is working to breathe new life into Dublin city by renovating buildings that are already there – and have been derelict for years. With roughly 33,000 empty buildings in Dublin alone, could these works be the key to solving the housing crisis?

Working through the Repair and Lease scheme, which was rolled out last year, the Peter McVerry Trust has already renovated three disused buildings, creating 50 apartments across the city. Now the charity is hoping to expand its reach even further by getting those who own derelict buildings to cash in on the scheme to help alleviate homelessness.

Applicants who own a derelict property can get a grant of up to €40,000 if the building has been empty for over a year to refurbish it. The only caveat is that they must make the property available for those on the social housing list. However, the advantage is that the Peter McVerry Trust takes over the running of the apartments and acts as landlord to the tenants, leaving the building owner with guaranteed rent every month.

The housing charity is on the cusp of opening its third development, a fine inner-city build that will bring an embattled part of Dublin’s landscape back to life.

St Agatha’s Court, on North William Street, was originally built in the 1960s to house elderly people on the social housing list, however, the building had been derelict for eight years. Those eight years have not been kind to St Agatha’s Court, which is within 500 metres of a church and a primary school. The building had some of its apartments burned out, and others had fallen into disrepair over the years. When the Peter McVerry Trust came in, the doors had been replaced with steel to protect the apartments from further vandalism. To an outsider’s eye, they would never be fit for use again.

However, the charity has now revitalised the building by adding on extensions and renovating the entire development, creating beautiful homes for those on the social housing list.

Boasting wide, spacious rooms, the apartments are bright and airy and will soon be filled with life by their new residents, who will include both families and single people from the social housing list. While some of those on the list are already living in private rented accommodation, at least half of the 14 new places will be filled by people who are currently homeless.

The buildings the trust has renovated to date are publicly owned, however the charity is now encouraging private property owners to avail of the scheme too. If somebody with an empty house would like to rent it out, but is unable to afford to renovate it first, the Repair and Lease scheme will help them do just that.

Alongside St Agatha’s Court, the Peter McVerry Trust has renovated two other developments: Hogan Court, behind Holles Street Hospital, and Clare Lane, which is down an alleyway just beside Dublin’s National Gallery. Both residences may look like standard flats from the outside, but they have become home to people who had been sleeping rough for years.

The charity last year developed Hogan Court, with new residents welcomed into their homes in May 2016. The flats there are all one-bedroom apartments, as the majority of homeless people are single. While they are small, they have character and flair, and have been tastefully decorated to make their new residents feel at home. The development was completed in just a 12-week period, bringing the empty, dilapidated flats back to life.

Similarly, Clare Lane, beside the National Gallery, has become home to people from the social housing list, including some who had previously been sleeping rough. The building was originally bought by the National Gallery for a planned extension just two years before the financial crash hit. The recession put paid to those plans, leaving the building empty. Now, its inhabitants have the enviable position of living just metres from some of the world’s most famous art, and in the heart of Dublin city.

The Peter McVerry Trust operates and runs the buildings, and helps to support the inhabitants adjust to their new lives. Each resident has a key worker, and there is somebody on call 24/7 for emergencies. As some of the residents have been homeless for long stretches of time, adjusting to having a home can be difficult.

Each resident pays what they can in rent, which is usually €23-€24 per week. However, this goes up if they find employment. The opportunities have been boundless for the new residents; one man was recently working two part-time jobs having previously been homeless and without any opportunity for employment. Two others are working full-time, and others are back in education.

While the rent payment may seem small, the charity makes up the shortfall so private property owners interested in investing will get a guaranteed rental income.

Francis Doherty, head of communications with the Peter McVerry Trust, said they hoped for more owners of empty properties to get in touch with the charity and to apply for the scheme.

“The scheme should be attractive to property owners because it offers upfront funding for repair works, guaranteed rental income for between 10 and 20 years and a voluntary housing agency will manage the property and support the tenant at no cost to the property owner.

“Empty homes offer an immediate way of reducing the number of people sleeping rough and the number of individuals, couples and families in emergency accommodation,” he said. “We urgently need access to housing, and empty homes are quick wins at a time of acute pressures on the homeless system.”

Case study: ‘I never did have my own home before’

Veronica Gaffney (42) was just in her early-20s when she ended up living on the streets. Some 19 years on, she finally has her own home in Hogan Court. A tidy, one-bed apartment, she has her own space and the safety and security she has always craved.

Born in England, Veronica moved to Ireland when she was still a child. However, her life went downhill upon entering adulthood. She became an alcoholic and soon ended up on the streets. “I never did have my own home before,” says Veronica. “I was homeless, living here, there and everywhere.”

The years she spent on the streets were incredibly difficult for Veronica. Battling addiction and illness, her situation often seemed hopeless. Worst of all for Veronica was that she often had to stay in hostels for the homeless, which she said were dangerous and frightening places to sleep.

“I couldn’t cope [with the hostels],” she said. “I wouldn’t stay in them. They’re horrible places.”

The development at Hogan Court has changed Veronica’s life completely. Before she got her flat, an average day consisted of trying to find somewhere safe to spend the night, and trying to keep out of harm’s way. Today, things have improved hugely for her. She finally has her life back in her own hands.

“I feel great now in myself, having my own home. Being able to come home, watch TV and cook the dinner; there’s a sense of safety about that.”

The apartment is compact, consisting of three rooms – a living area, which has a television, small dining table, a television, a sofa, and a pull-down bed, as well as a bathroom and a kitchen. While it may be small, the development at Hogan Court has had an enormous impact on Veronica’s life, and means that for the first time, she has a place to call home.