‘Sex for rent’ in Ireland: massages, modelling, no money 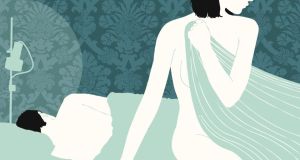 Vulnerable: foreign women arriving in Ireland are most open to sex-for-rent abuse, according to Ruhama. Illustration: Neil Webb/Ikon/Getty

As Ireland’s rental crisis continues to worsen, “sex for rent” ads have begun to appear for properties in Dublin. The sex-for-rent phenomenon has attracted considerable coverage in the UK, where people – mostly women – have been coming forward to describe their ordeals.

The most basic scenario involves a landlord offering rent-free accommodation to a woman – occasionally to a man – in exchange for sex. But few of the transactions are that simple. The ads are often phrased cryptically, not explicitly referring to sex but implying that accommodation will be offered in exchange for unspecified benefits.

This week 10 such ads for accommodation in Ireland were live on the classifieds websites Craigslist and Locanto. (This number excludes duplicate adverts, which in some cases have been placed several times by the same person.)

Carl, a 44-year-old Dubliner, has advertised several times in the past few months for a young man, between the ages of 18 and 21, to share his bedsit with him rent free. In the advert he says that he is bisexual and prefers “open minded bi/gay student aged males”.

As Carl is a photographer, he says, he might require the younger male to do some modelling in lieu of rent

He goes on to say that, although he doesn’t require rent money, he charges €25 a week for electricity and wifi and that, as he is a photographer, he might “require” the younger male to do “some modelling in lieu of rent”.

Another man, who lives in a suburban part of Dublin, is looking for a woman for a “two-week trial period”, with “longer availability possible”, where she could do housework and massage him in lieu of rent. He describes himself as a single 30-year-old male and asks interested women to email him “and tell me a little about you”.

He also says that the woman who moves in will “preferably” be Latin American.

The Irish Times has contacted all the men who have advertised sex-for-rent arrangements on these websites in the past two months. None will be interviewed by phone or in person. Two respond by email.

I was splitting up with my girlfriend and was looking for an alternative way of doing things. I got around 30 replies, all interested, from around Europe

Jack tells The Irish Times that he first advertised on Craigslist in April for a woman to move in with him rent free in exchange for sex. “I was splitting up with my girlfriend and was looking for an alternative way of doing things,” he says. “I got around 30 replies, all interested, from different places around Europe. However, I am still with my girlfriend, so I won’t be meeting anyone else.”

Another man, who advertised a free bed for a woman who “can look after” him and “keep the house clean”, says his ad is not a sex-for-rent proposition. “It’s just an offer for a needy, honest woman who could have free accommodation in return for cleaning a four-bed house,” he writes in his email.

Some men have been looking for women who would allow them to move in rent free in exchange for sex.

One of them says in his post that he finds himself in a difficult position.

“I am desperately in need of a room or shared room for the next month or so,” he writes in it. “Anywhere in Dublin is good. I’m hoping for a free place to stay and in exchange can offer my time and companionship. I’m open to discussing your requirements. Room needed immediately so if you can help, please don’t hesitate to call.”

He has not responded to The Irish Times’ request for an interview.

Others are looking for sex to feature as a part of their rental agreement but are also willing to pay the landlord rent each month.

One says that he is “a serious African male looking to find a room to rent during the weekends”. He adds that it is a serious inquiry and that he has his own house already, but that he needs a room within driving distance of Dublin, as he is attending weekend classes in the capital.

One man is willing to pay up to €400 a month in rent, as well as offering sex to, preferably, a mixed-couple: black male and white female

In contrast to most other advertisers, he is willing to pay up to €400 a month, as well as offering sex to “preferably a mixed-couple black male and white female”.

Another man is looking for a woman to rent a spare room in his flat. He is charging €450 a month for it but also hoping to find a woman “who likes to wear leather and latex around the apartment”.

The sum of €450 a month is significantly less than the average rental in Dublin, according to Daft.ie, which reports the average nationwide rent as having hit an all-time high, of €1,131 a month. This is combined with the lowest number of properties available for rent on record.

The figures are starker still in Dublin. Rents in south Co Dublin have surpassed those in parts of London, with the average monthly rent there now standing at €1,868.

Ruth Breslin of Ruhama, a charity that works to protect women from prostitution and sex trafficking, is concerned about the sex-for-rent phenomenon, which she says put women in danger of sexual exploitation and forced prostitution.

“We would always very broadly define prostitution or sexual exploitation,” Breslin says. “Very often it might not actually be money that is exchanged, but anything of value. So, for some women, that might be drugs. For others it might be food, or sometimes it might be for their children. In these cases it’s for a roof over their head.” She adds, “It’s an example, as far as we’re concerned, of sexual exploitation.”

Breslin says that foreign women arriving in Ireland for the first time are most open to this abuse. As some of them come to Ireland to escape poverty, they could find themselves struggling to survive financially in a country where rental prices are soaring.

If a woman has come to Ireland without any networks or social supports, and she has nowhere else to go, what might become of her?

“She might find herself highly reliant on somebody who is acting as a landlord but is looking for a lot more than your usual landlord-tenant arrangement.

“If she’s somebody who has come here without any networks or social supports, and she has nowhere else to go, what might become of her?”

Some names have been changed. If you have been affected by these issues and wish to seek help or more information, see ruhama.ie. If you would like to share a story on this subject with Patrick Kelleher or The Irish Times please email weekend@irishtimes.com with the subject line “Rent”. All messages will be treated confidentially