The Specialist: Eugene McGerr has worked in scaffolding since he was 16 and set up Safeway Scaffolding with his brother in 2002. Since then he has never looked back – or down 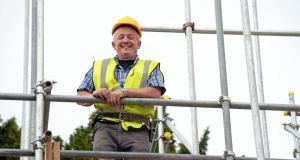 Eugene McGerr of Safeway Scaffolding: “I am more afraid of the wind that anything else – it can whip a plank out of your hand. Roofs are awkward because you have to be harnessed, but that’s what you do to make it safe for others to work.” Photograph: Eric Luke / The Irish Times

One of the more spectacular sights during the restoration of St Mel’s Cathedral in Longford was the scaffolding, a cobweb of steel and wood curving around the 30m-high bell tower. It was designed by a structural engineering company called Design Id known for their innovative solutions to complex projects, which also designed the Queen Post timber trusses for the replacement roof.

“It was very tricky and it was all done in bad weather,” says scaffolder Eugene McGerr, who was contracted by Rainey Restoration to erect it, “because it was formed in accordance with the shape of the tower – like a 50 pence piece – and, as the scaffolding went up, it stepped into the building. We started from the roof and had to set a loading bay on the bottom 90m below and carry everything up and then carry everything out.” Rainey had to use abseilers dropping down from the top to install the initial steel supports inside the campanile tower to create a platform for essential work.

Inside the cathedral, the “bird cage” scaffolding was an equally remarkable construction. Designed by Loscher Moran Consulting Engineers, it was erected by Seating & Access Contracts, an Irish company specialising in the erection of temporary structures all over the world. “It allowed us to work on the foundation, the roof and the main nave all at the same time,” recalls Kevin Fay, construction director of Gem Purcell, the main building contractors. McGerr’s company, Safeway, then adapted the initial bird cage scaffolding and dismantled it on completion.

From a farming family in Granard, McGerr, now in his 40s and still an occasional farmer, learnt his trade in Dublin, London and New York. At 16 he left home to work in Dublin on the building sites, initially helping on scaffolding.

Later he moved to London and worked on concrete shuttering (making forms for concrete, another skill of a high order) and scaffolding. After five years he moved again, this time to New York “concreting and scaffolding around Manhattan” and was later joined by his young brother, Patrick. “I worked with an Italian crowd for a time and learnt a good bit from them,” he recalls.

He has never been afraid of heights and loved working on towering buildings in Manhattan and on top of the cathedral in Longford where “you could see the whole landscape and be where other people can’t go so you are left alone and nobody bothers you”. The only accident he ever suffered was hitting his head off a scaffolding pole 10ft up in New York that necessitated nine stitches in his forehead.

The trade requires huge physical strength and in the UK requires a four-year apprenticeship course as well as learning on the job.

“It is the most physical job in construction,” says McGerr, “but young lads love it because it keeps them fit.” The tools of the trade are podgers (for tightening bolts), scaffold spanners, spirit levels, tapes and hammers and there are different types of scaffolding, he explains – tubing, kwickstage (the most common in Ireland and the quickest), cuplock (used in the cathedral) and layer. “If you’re doing houses, the kwickstage is the fastest, but with a building like the cathedral you have to use tubing because it is more flexible and allows you to get in and out of corners. Kwickstage is more rigid, more for straighter walls”.

’ He returned home to get married, built a house on family land, set up Safeway Scaffolding with his brother in 2002 and has never looked back. The company now employs 12 people as well as temporary young workers in the summer and they are currently working on a number of sites – scaffolding Belgard Castle for CRH and 118 houses in Castleknock for Andrews Construction. When we met, he was in the throes of scaffolding eight chimneys on two apartment blocks in Rathmines to allow for the repair of leaks. There are also jobs in Kilcock, Finglas and Cappagh Hospital “and wherever scaffolding is needed, I will do it. It is fierce busy at the moment.”

In Rathmines, the scaffolded chimneys are surrounded on all sides by green netting which not only prevents dust spreading, but also acts as a wind break. “I am more afraid of the wind than anything else – it can whip a plank out of your hand. Roofs are awkward because you have to be harnessed, but that’s what you do to make it safe for others to work. What I love about the work is being outdoors and would prefer to be out in the cold than inside in an office. Most people who have worked outside can never go back.”

The scaffolding was one of the biggest constructions on the cathedral, labourwise, he recalls.

“We had three lads there all the time and sometimes up to 10 people. Every single piece – of tubing, fittings, ladders and boards – had to be carried up and carried down.

“We were there for nearly two years and it was a very big job but different to any other because you never really knew what you were going to have to do. So it was very interesting and involved a lot of hard work.”

As we discussed the achievement of skilled craftsmen such as George O Malley on the walls and ceilings of the cathedral, he remarks without any trace of irony that “everybody has left their mark on it except us – there is nothing to show that we have ever been there.”

I wanted to learn more about how sex gets better with age, but my battery was running out
7