South Circular Road terrace raises the roof and adds a bedroom for €675,000 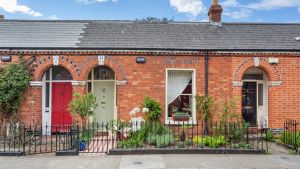 Just a year after it last came on the market – and sold for €500,000 – number 43 St Alban’s Road is once again for sale, with a number of changes. Then the terraced period redbrick off South Circular Road had been renovated as a one-bedroom house – that bedroom a double to the rear in an extension.

The new owner, though, had a wish list – a second bedroom, for guests, was a must, the low ceilings to the rear had to be raised and while there was an internal courtyard there was no access to it from the main living area and that had to be sorted. The position of the bathroom too at the rear blocked views of the rear patio garden.

With the help of what he calls a very patient builder, he changed the house’s layout, adding a small extension to the rear for an en-suite to the main bedroom and taking out that bathroom that was blocking the view. Now double-glazed doors open from the large airy living area out to the rear patio as well as the side courtyard. It’s now possible to see directly from the front door right through to the back patio which is partially covered for year-round use. In all, the house has 90sq m/969sq m.

The original front reception room – one of the reasons people like this style of house so much – remains the same with its working fireplace. The kitchen was moved to what would have been the hall and the space then opens up to a living area with a glazed wall with doors opening into the inner tiled courtyard. The second bedroom, now to the rear of the living room and adjacent to a new guest toilet, opens out to the courtyard.

The beautifully planted but tiny railinged front garden gives a hint as to why the owner wants to move on – having discovered how much he likes gardening during lockdown he is keen for a larger rear garden and has started househunting. With a D2 energy rating, 43 St Alban’s Road is for sale through DNG for €675,000.

I am the luckiest unlucky person I know
9