The property has new windows and insulation, and a partial new roof 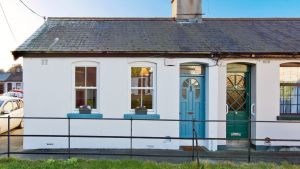 This article is 6 months old
View this property listing

Tucked away, and indeed hard to find in the myriad streets off Rialto Road, is a pretty end-of-terrace former artisan home at 149 Rialto Cottages.

Home to award-winning film and documentary maker Anna Rodgers, her husband Conor Kelly, a lecturer in film at Trinity College Dublin, and their two children, the couple are now in search of a larger home for their growing family.

Anna had rented the house for some time, and had tried over the years to purchase it. “I just loved it so much, I would write to the owner every so often asking to buy it. Eventually I had to move out as it was going on the market, and fortunately in the end I was the lucky bidder.”

After spending 10 years in total at the property, of which she says: “I would never have met my husband if it wasn’t for this house, and it’s also very emotional when you have brought your babies here, but we really need somewhere bigger.”

After buying the house in 2015 for €197,000, Anna gave the property an overhaul, installing new windows and insulation in addition to a partial new roof.

What is lovely about the space are the 11ft high ceilings in the main room, and the all-white paint means light just bounces off the walls.

Two bedrooms lie off the main room, which is warmed by an open fire. The fact that the property is end-of-terrace allows for a small whitewashed courtyard with side access.

The property, standing at 46sq m (495sq ft), would make a great alternative to an apartment as it has so much character, and is just minutes from a Luas stop.

Rialto is fast becoming a hipster area with the arrival of local eateries, and the camaraderie between neighbours here at Rialto Cottages is well known.

“When I was pregnant with the children, neighbours would pop in to see if I was okay or needed anything. There is a real friendliness here that is so hard to find. We want to stay in the area as we love it so much, we just need something bigger with a garden for the kids.”

The cottage, in turn-key condition, is now on the market through Sherry FitzGerald seeking €295,000.