Townhouse is tucked away on Adelaide Road, a five-minute walk from Stephen’s Green 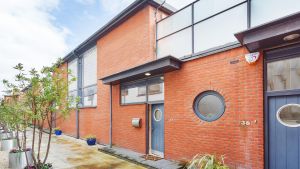 Symphony House is a development of apartments and townhouses designed by O’Mahony Pike and built in 2002. Number 37 is one of a terrace of six redbrick townhouses. The development, tucked away on Adelaide Road, is a five-minute walk to St Stephen’s Green and fits harmoniously into its redbrick surrounds. Established landscaping gives it real privacy.

At hall level there are two double bedrooms. Neither is huge but each has good built-in wardrobe space and windows that look out to the waterway.

Alongside is a bathroom with a rather smart round window that brings in a good deal of natural light.

Down the hall is the eat-in kitchen, decked out in simple cherrywood units with black polished granite countertops. The kitchen table and chairs overlook the water. The ceiling heights here are good and there is scope to install a large table or indeed install built-in banquette seating to make it more a place you might like to linger.

While these rooms have great views, it is only when you climb the stairs to the large open-plan living/diningroom that the real potential of this property is revealed. The ceiling heights in the room average about 3m and there is light streaming in on three sides.

A black granite surround gas fireplace is the main focus of the room. A stove would look really well here and would soften the focus in favour of the floor-to-ceiling windows that overlook the canal. This area could be built up slightly to create a deeply upholstered window seat and a place where you could spend hours people-watching or reading the papers.

During the week the traffic along Grand Parade is constant, creating a constant hum, but this dims right down at the weekends. Off the lounge is a decked roof terrace that is south-facing and a real bonus space. If you installed an outdoor heater you could really make this into another room.

For very little outlay, repainting and refurnishing it would make a decent corporate rental earning up to €3,000 per month, according to John Coleman of agent Ganly Walters, who are seeking €695,000 for the property, which comes with one secure underground parking space.

Management fees are about €1,696 a year. The apartment is close to the city centre, a few hundred metres from the National Concert Hall and opposite the Eye and Ear hospital.

Louis Walsh was a former resident of number 35 – the penthouse. Another townhouse in the row of six, number 39, sold for €675,000 in April 2016 through agent Felicity Fox.