Sit under the stars on Sydney Parade for €2.1m 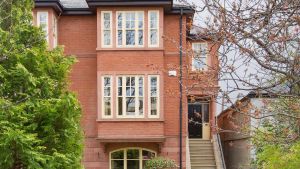 Number 63 Sydney Parade Avenue and its twin next door – number 65 – were constructed in 2002. Designed by architectural firm Breffni McGrane, the house bears all the hallmarks of McGrane designs featured throughout the city: a mixture of stone and red brick exteriors with deep set bay windows.

The current owners Bill and Ainey McHugh bought the property just after its construction and, after raising their three children here, are now downsizing due to an empty nest.

With 279sq m over three floors, it is quite a large space for a couple.

“It was great for the kids growing up, as there is so much space they could all have their friends over in different rooms,” says Bill, who ran the media-monitoring company News Access.

The family spend their time at garden level, which features a living room and a spacious kitchen with a serving counter to a very bright, south-facing conservatory. A lemon tree and tropical plants are flourishing thanks to the room being bathed in light.

Up a spiral staircase lies Bills favourite part of the house – a mezzanine overlooking the conservatory: “After dinner it’s lovely to sit up there and have a nightcap under the stars.”

The mezzanine leads into the dining room, which lies at hall level and opens into a formal drawing room. A dumb waiter from the kitchen allows simple serving for formal dinner parties. Both rooms have antique fireplaces, currently fuelled by gas, and sunshine pours into the dining room thanks to the glass atrium of the conservatory.

The garden, which is accessed via two sets of French doors, is simply laid out with variegated camellias, bamboo and agapanthus, set around an al fresco dining area paved with Indian sandstone.

Despite the house being 15 years old and raising three teenagers, it is in turnkey condition and new owners will just have to unpack their bags.

Sherry FitzGerald is seeking €2.1 m for the property – its twin next door was sold in January 2017 for the same amount.