Residential sales in Republic up one-third on last year

Despite increase in activity, total transactions for 2015 likely to be in line with 2014 figures 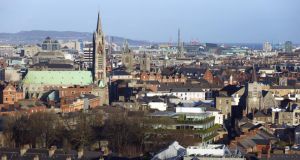 Property transactions for the first half of the year in the Republic are up by more than a third on the same period in 2014.

However, it is less certain that full-year sales will exceed the total sales figure countrywide for 2014 because of a strong rally at the end of last year to avail of capital gains tax (CGT) exemptions and to avoid the new mortgage lending restrictions.

An analysis of Property Price Register figures shows there were 21,425 sales between January 1st and June 30th this year. This is 34.6 per cent higher than the 15,920 transactions recorded during the same six-month period a year earlier.

However, despite the notable increase, sales so far equate to just 49.6 per cent of the 43,164 transactions recorded for the whole of last year and so are largely in line with total transactions last year.

John O’Sullivan, chairman of residential property for the Society of Chartered Surveyors Ireland (SCSI) expects sales “will end marginally where they were last year” because of the rush experienced at the end of 2014 when investors were anxious to get deals across the line before the CGT incentives were removed.

In the final quarter of last year there were almost as many transactions (15,823) as there had been for the first six months (15,920). O’Sullivan, who works with Lisney, says business has been good for agents since the start of 2015 but there was not the same rush to get sales over the line as there had been.

“There’s no crystal ball to see what sales levels will be like in the second half of the year but I’d expect the annual figures to come in close to those of last year.

“The Central Bank rules and the end of CGT have had a dampening effect but that’s not necessarily a bad thing. Last year was an exceptional year but the last thing we want is to go back to a boom-and-bust cycle. There’s a lot more realism out there now but there are still issues in the market, like with the number of houses being built, and we’re still stuck in the hangover of the bust slightly in that regard.”

There was also strong growth in the commuter counties including Kildare (47.7 per cent), and Meath (28.7 per cent). Wicklow remains almost stagnant, with transaction growth of just 2.1 per cent in the first six months of 2015, indicating a clear shortage of stock.

Angela Keegan, managing director of property website MyHome.ie, says she is surprised sales are not further along for the first half of the year, adding that the next few months will have a huge bearing on 2015 sales. “The strong performance in the first half of the year was largely fuelled by first-time buyers getting into the market with mortgage approval under the old rules,” Keegan said. “Last year only 2.5 per cent of the 1.65 million households in the country transacted and that’s quite a low number, so earlier in the year I would have thought that sales would continue to grow on the back of a good 2014.

“With the economy improving it would only be a natural follow-on that more homes would transact.

“By the end of Quarter 3 we should have a real sense as to what extent the Central Bank has put the brakes on the market but the good news for those looking to buy for the first time is that last year’s uplift in prices hasn’t continued into this year.”