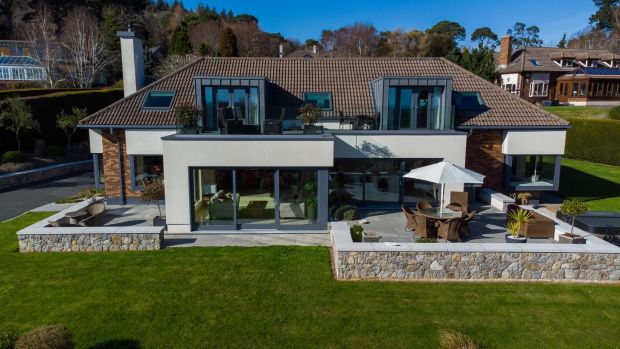 True to its French translation, Farniante, a fine four bedroom house in Delgany, is indeed the spot for ‘sweet idleness or happy inaction’.

Situated on an elevated one-acre site with sea views, the property was given a complete overhaul by its current owner Bernie Connole.

In an interesting twist, the underbidders moved to the locality and became Connole’s neighbours.

She engaged Greystones-based architect Colum Ó Broin to redesign and extend the property, adding a sunroom and expanding the kitchen. In addition to a new balcony, a garage was converted to a living room, and walls were removed internally to give a greater flow to the property.

Connole’s brother-in-law John Connole arrived from County Clare with his Connole Construction team, who were tasked with the build and renovation into what the property is today: a fine 366sq m (3,940sq ft) four-bed with plenty of space and interesting details.

“I watched the huge pile of quartz outside the back door and thought to myself ‘how is he going to do this’?” recalls Connole.

For two weeks Fitzpatrick chiselled away at each piece of stone by hand to create the internal walls. Dry-stone masonry is an art form that is rapidly disappearing with the advent of superficial cladding.

The gardens were tasked to Frazer McDonough of Rock and Stone Landscapes, a former medallist at Bloom and RHS (Royal Horticultural Society) in Tatton Park in the UK, who laid out the one acre site with herbaceous borders, lawns, pathways and impressive outdoor lighting.

“I really wanted to open the house up so it would take in the views,” says Connole “and Colm [Ó Broin] drew up the plans for the balcony. Now the property has sea views from every room except the living room – as that was a garage before we converted it.”

The balcony, accessed from both the main bedroom and a second bedroom, captures the sun and appears to retain the heat thanks to zinc cladding. All the windows are Aluclad from Munster Joinery – which protect against salt air – and along with lots of new insulation, the property now has a BER of B1.

A particular feature is the stepped ceiling in the cinema room – a former garage – which adds interest to an otherwise boxy space.

A hot tub beside the patio is where Connole and her daughter have spent every Saturday evening during lockdown.

“We go out there for a soak and a glass of wine with music blaring – the fact that the gardens are on an acre means we are not disturbing any neighbours”.

Connole is now heading to warmer climes and has placed Farniante on the market through DNG Bray seeking €1.6 million.

How to choose and grow the best clematis varieties

‘It’s a treat’: The rise of magic mushroom microdosing