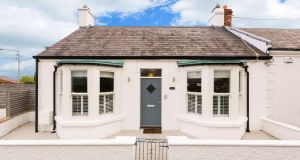 The double-bay fronted, end-of-terrace property was bought by the current owner in 2011 as a three-bedroom house with a lean-to kitchen and an outside toilet 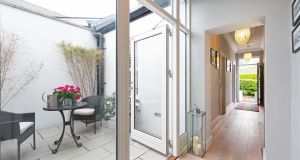 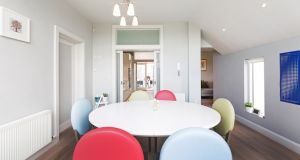 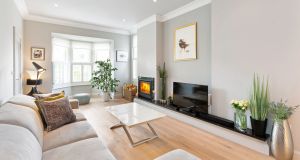 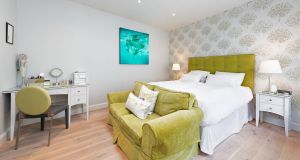 Blink and you might miss Monte Vella, a tiny cul-de-sac situated on the edge of Dalkey village, just off the Barnhill Road.

The terrace of just five cottages was reportedly to have been built for Italian workers at the now disused quarry nearby but this may be just local lore for the village boasts many streets with Italianate names.

The owner of number one, a double-bay-fronted, end-of-terrace property, bought it in 2011 as a three-bedroom house with a lean-to kitchen and an outside toilet but she loved its period charm, especially its 2.8m ceiling heights.

She commissioned local architect Paul Scully, who is now based in Qatar, to reimagine it, doubling its size to about 126sq m/1356sq ft of space and in doing so turned it into a very considered two-bedroom home.

The first of the two bedrooms is to the front of the house and its bay window washes the room in light. The room is used as a home office and has plantation shutters, as do most of the property’s windows.

The livingroom is across the hall. It has an insert fire and is spacious enough to fit a sizeable L-shaped sofa although given the location of the door it means the fire is off-centre to the seating. The original door was set further down the hall, and has been blocked up but could be reopened.

From the livingroom there is an discreet opening that leads through to the diningroom, a lovely, dual-aspect room with a wall of glass framing the small, north-facing garden that abuts Barnhill Road. The broken-plan layout works really well with the personality of the period property and allows free movement while also creating properly defined spaces. The kitchen is a smart white contemporary galley-style set-up that links the hall and the diningroom and has sliding doors at both ends, giving you the option to open or close it off from the rest of the property. It’s a very clever use of space that allows light in from the small, sheltered and southerly internal courtyard across the hall.

The master bedroom is to the back of the house, which is restfully dark, but you can look across the courtyard from the bed. The room also has a walk-through wardrobe and a wetroom clad in anthracite tiles with a contrasting stripe of iridescent mosaic adding a pop of colour. The room is lit from above by roof light.

This is all part of the sizeable extension and includes an attic space, accessed via a timber staircase from the master where there is another 31sq m/333sq ft that the owner uses as a yoga room but could also be a very private home office.

The property’s original third bedroom is now a luxurious bathroom with Villeroy and Boch fittings. From the bath you can look across the courtyard and relax.

As a result of the refurbishment the property now has an impressive B2 Ber rating, off-street parking for one car, and is asking €925,000 through agents Quillsen.