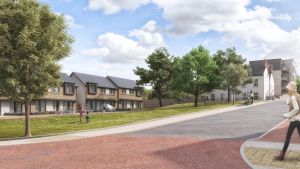 The grounds of fine period piles remain an appealing prospect for builders eyeing their development potential. Recent low density schemes include the Newry-based Bushell Investments work at Neptune House in Blackrock, where the main house was turned into luxury apartments and the grounds have been populated by 13 new, A-rated homes.

Maplewood Residential is another house builder that has successfully married the old with the new. It recently successfully developed Knockrabo, on Mount Anville Road, Goatstown in Dublin 14, a site which it bought with equity partner Broadhaven Credit Partners for more than €25 million.

Next month Maplewood launches Rockville, a development of 51 units within the grounds of Rockville House on Glenamuck Road in Dublin 18. Designed by Duignan Dooley Associates (DDA) the development will comprise 37 three- and four-bed houses and 12 one- and two-bed apartments on completion.

The showhouse has been designed by House & Garden and the look, feel and finish will be very similar to the Knockrabo scheme, Whelan says.

The area development plan which will see a new town centre adjacent to this scheme, has attracted a number of other small schemes for sale along Glenamuck Road. Whelan says Rockville is unique, however, because it is situated within the grounds of the old house. “It feels established from the get-go. There are mature trees throughout the grounds.”

The estate’s walled gardens date back to the 18th century and will remain part of the backdrop. There’s also a sense of history, says Whelan. The dairy farm at Rockville House supplied much of Dublin city with its fresh milk in the early 19th century.

The five-bay, two-storey over basement farmhouse, which dates back to 1757 will also be refurbished and sold as a one-off, as will the gate lodge at the entrance.

Knockrabo was the third site purchased by the Irish-US partnership. The others were Sion Hill in Drumcondra and Dodderbrook, on the Old Court Road, in Ballycullen, Dublin 24 where the company is bringing on new phases of two schemes. There are 16 four-bed houses launching at Ballycullen Green and 20 four-bed semis at Dodderbrook.